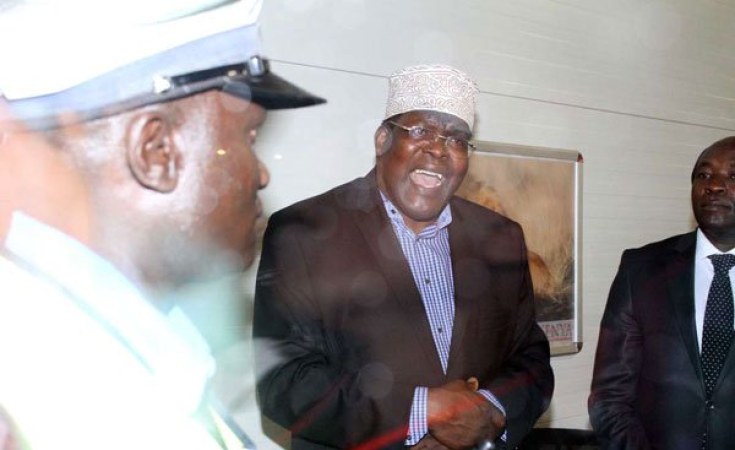 Photo: Daily Nation
Lawyer Miguna Miguna reacts after he was locked up on arrival at Jomo Kenyatta International Airport on March 26, 2018.
The Nation (Nairobi)
By Ibrahim Oruko

The pensive face of Nasa leader Raila Odinga as he helplessly watched security officers grab Miguna Miguna by the waist in a bid to force him out of the country on Monday night told it all.

The former prime minister's reputation as a troubleshooter for his lieutenants was on the line, especially in the backdrop of the March 9 handshake between him and President Uhuru Kenyatta that was meant to build political bridges.

Despite what was agreed being a guarded secret between the two, opposition aides believe that rule of law was one of them. At Jomo Kenyatta International Airport on Monday night, however, Mr Miguna was on his own, forced to fight off his citizenship nightmare the brutal, bare-knuckle way.

Although Mr Miguna was not entirely blameless for the standoff -- as he refused to have his Canadian passport stamped -- there was hope as soon as Mr Odinga entered the airport that a solution would be found.

Mr Odinga did not speak to the media when he alighted from his car at 10.05pm. He ignored journalists' questions and walked straight to Terminal 1E, where Mr Miguna was holed up alongside his lawyers James Orengo, John Khaminwa and Cliff Ombeta.

After a brief conversation with Mr Miguna, the former Prime Minister was soon on his phone. Owing to his new relationship with the President, it was assumed that he might have placed a call in the hope of securing the release of his friend-turned-foe-turned-friend.

But lawyer Nelson Havi, who was at the airport, told the Nation on Tuesday that Mr Odinga might have got into the act a bit late as the decision to re-deport Mr Miguna had been made five hours earlier, at about 3pm, after the fiery lawyer refused to surrender his Canadian passport.

"We believe that was the time the decision to take him back to Dubai was made," he said yesterday, suggesting there had been a high level consultation within the government over the manner the lawyer was handled.

However, Mr Havi does not know at what level the decision to turn Mr Miguna back was made.

"What we know is that when it became clear that he would not surrender his Canadian passport, and that he was not ready to sign papers to get a visa, the decision to send him back was made," he said.

Mr Miguna has been an acerbic critic of the Jubilee government, and his role in the January 30 'swearing in' of Mr Odinga the point of no return with state agencies.

He was arrested and deported to Canada on February 9 as, the government claimed, he was not Kenyan since he had renounced his Kenyan citizenship in 1988.

His return on Monday at 2.30pm came less than 24 hours after Mr Kenyatta and Mr Odinga exchanged niceties at the Kenya Open golf tournament at Muthaiga Golf Club on Sunday, where they re-affirmed their desire to unite the country following last year's disputed general election.

Mr Odinga's arrival at the airport coincided with word that the State had deemed Mr Miguna an undocumented passenger, meaning he would be deported again to his adopted Canada, via Dubai, because he had used an Emirates flight to enter Kenya.

Sources at Kenya National Commission on Human Rights blamed the standoff on Interior Cabinet Secretary Fred Matiang'i, who, it was claimed, had issued orders that Mr Miguna should unquestioningly comply with the demands the immigration department was making.

Mr Orengo's arrival at the airport a couple of hours before Mr Odinga was understood to be for the sole purpose of engaging Dr Matiang'i, while Mr Odinga's entry into the melee was proof that the Dr Matiang'i route had borne no fruit.

Mr Odinga engaged in a short scuffle with the police before settling to make a call. As the Nasa leader talked on the phone, Mr Miguna attempted to dash out of the airport, his luggage well dangling from the baggage carrier, only to be stopped by three police officers who used their bodies to barricade the door.

It is estimated that between 300 and 400 police officers were mobilised for the operation that would see Mr Miguna picked up, in full view of Mr Odinga, whisked away, and forced into the Emirates plane.

A forlorn-looking Mr Odinga, sandwiched by his security detail, emerged from the terminal minutes later, defeated and angry. Again, he did not speak to the media.

"Mr Miguna has been whisked away by about 40 undercover police officers," Mr Orengo briefed the media shortly afterwards. "He has been described as an undocumented passenger and forced into an Emirates flight."

His briefing, however, was cut short by heavily armed police officers, and that was the last of orderly media engagements at the airport before everything went blank.

Mr Miguna spent the night at the airport, but his lawyers, journalists and friends were barred from seeing him on Tuesday.

More than 24 hours after landing on Kenyan soil, he was holed up at Terminal 2, where he had been transferred, ostensibly to minimise the image damage to Kenya at the international arrivals, and also to better contain him, the battering of journalists looking for him, and the team of lawyers seeking to secure his release.