Kenya: Miguna Supporters in Kisumu Protest His Lock-Up at JKIA 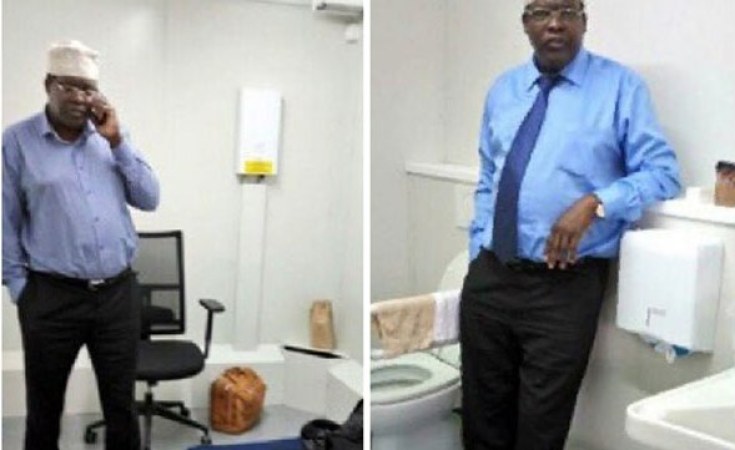 Photo: Daily Nation
Miguna Miguna in the "toilet" cell in which he spent 72 hours at Jomo Kenyatta International Airport in Nairobi before he was deported on March 28, 2018.
The Nation (Nairobi)
By Eddy Odhiambo

Supporters of self-declared National Resistance (NRM) ‘general’ have taken to the streets of Kondele, Kisumu, to protest his continued detention at Jomo Kenyatta airport in Nairobi.

The group, which started arriving in smaller numbers  at around 10am, began by pushing huge rocks onto the main highway linking Kisumu and Kakamega towns, forcing traffic to use alternative but longer routes.

They chanted “No Miguna, No peace!” and carried placards demanding justice for the lawyer.

Some set old tyres alight while others wore T-shirts with labels of “resist”, a slogan marketed by Dr Miguna to promote defiance against Jubilee government.

Dr Miguna had been deported to Canada last month but returned on Monday following a court order authorising his re-entry into Kenya.

But while at the JKIA, he declined to use his Canadian passport and refused to sign citizenship documents provided by the Immigration Department.

While the Department says he had renounced his Kenyan citizenship two decades ago, Dr Miguna denies it and maintains is a Kenyan by birth.

During the court battles preceding his controversial deportation, the government had confiscated his Kenyan passport, which was then perforated.

The High Court later ordered that it be surrendered to him.

But a punctured passport is invalid meaning he cannot use it to travel.

The protesters staged demos after Dr Miguna spent the third day in the JKIA cells.

The protests come amid another court battle in Nairobi to have him freed and produced in court.

But government lawyers argued he had yet to technically be allowed onto Kenyan soil and needed to go through the entry procedures.

The youth are angry that Nasa leader Raila Odinga has not secured the release of Dr Miguna.

They claim Mr Odinga had promised that the handshake had, among other things, been based on certain promises such as ensuring the fiery lawyer returns.

During his recent rallies in Kisumu, Mr Odinga said he had reached a deal with President Uhuru Kenyatta to address certain injustices committed against his supporters.

Previous Story
With Odinga Beaten, Miguna Was a Lone Ranger at JKIA
Next Story
State Still Failing to Produce Miguna in Court

With Odinga Beaten, Miguna Was a Lone Ranger at JKIA