Kenya: Miguna Miguna Lands in Dubai After Deportation From Kenya 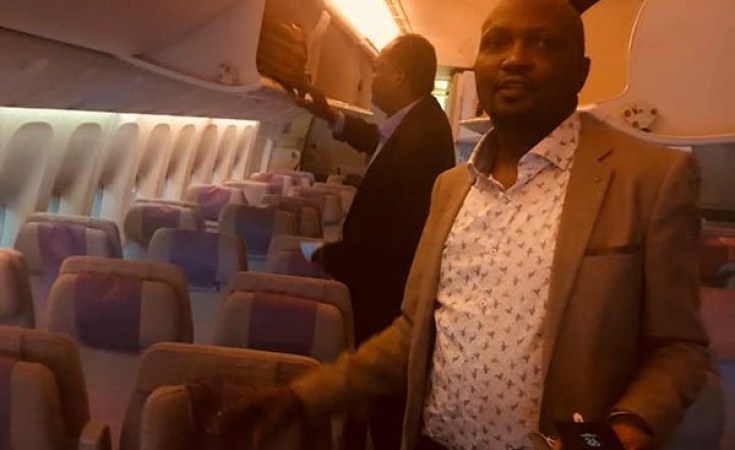 Photo: Daily Nation
Miguna Miguna prepares to disembark from the plane on landing in Dubai on March 29, 2018.
The Nation (Nairobi)
By Wycliffe Muia

Lawyer and National Super Alliance (Nasa) activist Miguna Miguna has landed in Dubai and refused to leave the international airport.

The self-declared general of National Resistance Movement (NRM) was kicked out of Kenya on Wednesday evening in breach of three High Court orders.

In a video recording posted by Gatundu South MP Moses Kuria, who appeared to have boarded the same flight with the fiery lawyer, Dr Miguna is seen arguing with a security officer telling him to "kill" him if he wants.

The airport officer is heard offering a wheel chair to ferry Dr Miguna to the security office.

"I don't want. You don't respect human rights," Dr Miguna is heard shouting the officer down.

The self-declared general of National Resistance Movement (NRM) is seen trying to make some calls as the security officer pleads with him.

So far, there has been no official statement on the second deportation from the government.

Dr Miguna's social media accounts earlier indicated he was being held in a toilet at Jomo Kenyatta International Airport's Terminal 2.

"This morning at Dubai International Airport I bid farewell to the leader of the breakaway Eastern Suburbs of Toronto, NRM General Miguna Miguna, who completed a successful 4-day state visit to Kenya," posted the MP, a staunch supporter of Jubilee and President Uhuru Kenyatta.

"Aboard Flight EK 722. I can positively confirm that we have all nationalities on this flight, including a very bald headed Canadian."

Miguna Miguna - How I Was Deported to Dubai

I Was Drugged Before Deportation - Miguna