Kenya: Miguna Blames Raila Odinga Over His Woes in Dubai 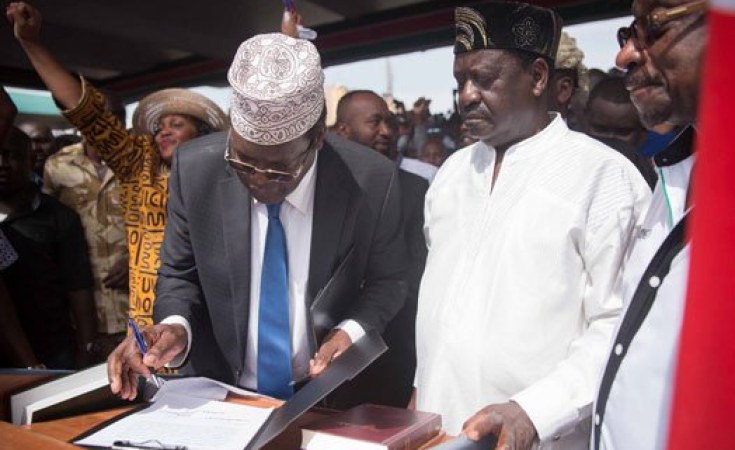 In a statement from Dubai, where he was deported, Dr Miguna on Saturday also accused Mr Odinga of dining with his (the lawyer's) oppressors.

“Raila Odinga cannot and should not be enjoying Easter abroad and dining with the tyrants when the person who swore him in as the people’s president is being “murdered” by those who stole his election and who have killed and maimed his supporters,” he said.

Although the former Prime Minister has not commented publicly about Dr Miguna’s deportation to Dubai, he tried to rescue him at the Jomo Kenyatta International Airport on Monday evening.

Reports indicate Mr Odinga left to the airport after his mediation efforts, including a frantic call to President Kenyatta, hit a brick wall.

The government, sources say, insisted that Mr Miguna surrender his Canadian passport before being allowed into the country.

The Orange Democratic Movement (ODM) leader, who has since agreed to work with President Kenyatta for sake of national healing and unity, also briefly attended a High Court session on Dr Miguna's citizenship case.

Dr Miguna called his supporters to demand action from Mr Odinga, saying his suffering was as a result of swearing him in.

He also called on his supporters to hold demonstrations and push the government to respect court orders and allow him back home.

“Mobilise large groups of people to demonstrate, make noise and demand that my birthright, constitutional and legal rights be respected and upheld,” he said.

“Court orders be obeyed; my Kenyan passport be returned or a new one issued; my security and safety be safeguarded.”

His and National Resistance Movement (NRM) supporters, he said, should liberate him from Dubai.

"I need to be liberated from Dubai, given a safe and secure passage and entry into my country of birth, Kenya without any further delay," he said.

The deportee pleaded for urgent medical attention, claiming the chemicals he was injected are taking a toll on his health.

“I must see a doctor or physician and have thorough toxicology tests done,” he said.

“The illegitimate tyrants in Nairobi injected poison, disease causing agents and other fatally debilitating chemicals in my body.”

The lawyer was kicked out of Kenya on Wednesday evening after a 72-hour standoff at Jomo Kenyatta International Airport in Nairobi.

The impasse was precipitated by his refusal to sign immigration papers and have his Canadian passport stamped.

First deported to Canada in February, Dr Miguna claims Kenyan and Canadian citizenship, but the government says he renounced his Kenyan birth right when he acquired his Canadian passport.

The High Court in Nairobi has ordered the government to facilitate his return from Toronto to take part in his citizenship case after the Court of Appeal rejected State's request to have the orders suspended.

The Department of Immigration had on Tuesday issued application papers to Miguna to enable him start the process of enabling him regain his Kenyan citizenship as ordered by the courts, and to also facilitate his entry into the country after he refused to produce the Canadian passport he had used to travel back to Kenya.

But when the application documents were delivered to him in the presence of the Consular Officer of the Canadian High Commission to Kenya, Ms Fiona Jarvis, Dr Miguna refused to fill in the relevant details and sign the forms.

Instead, he tore the official documents and was denied entry.

The Kenya National Commission on Human Rights (KNCHR), which has been following up on the Miguna case because of a court order and will be filing a report in court, on Thursday said it was disappointed by some of the lawyer’s decisions.

“I was disappointed with Dr Miguna because the court order had allowed him to use his Canadian passport to gain entry into the country,” said KNCHR chairperson Kagwiria Mbogori.

“I had expected him at least to use it to gain entry into the country, and his refusal boggled us. There were some missteps on both sides.”

Judiciary on the Spot Over Miguna Deportation

Unknown People Attempted to Break Into My Room - Miguna