Kenya: How Lawyer Miguna Bluffed His Way to Infamy 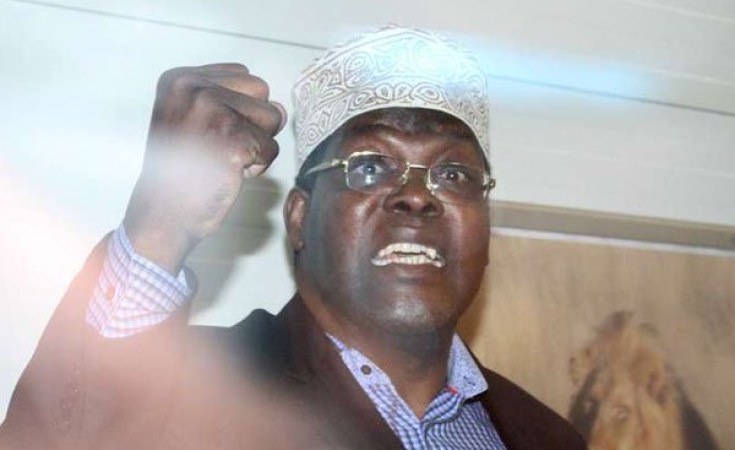 On Saturday, March 10, just a day after President Uhuru Kenyatta and opposition leader Raila Odinga shook hands on the steps of Harambee House, Nairobi, and vowed to bury the hatchet, deported lawyer Miguna Miguna, who commissioned Mr Odinga's 'oath' as the 'people's president' on January 30, flew to Dallas, Texas, USA, to deliver a talk about his resistance movement's ideals.

The trip was part of his global tour to publicise his beloved National Resistance Movement, a proscribed organisation that was the cause of his arrest, detention and eventual deportation to Canada in early February.

Inside a brightly-lit hotel conference room, Mr Miguna was in his element: Livid, angry and wounded -- particularly at, and by, Mr Odinga, whom he felt had betrayed the opposition's cause and, by extension, him.

To Dr Miguna, Mr Odinga's handshake with President Kenyatta was akin to "a man who is happily married leaving his wife" for a call girl.

And with Mr Odinga now worming his way into the Jubilee inner circles, Dr Miguna promised to take over the leadership of the resistance movement and oust Mr Kenyatta through massive demonstrations.

While he had previously talked of his plans to push Mr Kenyatta out of power, it was at the Dallas meeting that the lawyer -- who by last evening was holed up in Dubai after being deported again on Wednesday last week -- detailed the plot and its choreography.

At the centre of it was the massive support that the NRM enjoyed at the time, and which, he said, could not be drowned by the Harambee House handshake.

To top it all, whether he was bluffing or not, he said he only needed one week to execute his plan.

"They have 350,000 armed men in the military, police, the General Service Unit, and the Prisons," he said of the Armed Forces.

"So the formula is easy; I will bring five million men and women to the streets of Nairobi. You can't shoot that. That's why they didn't shoot in The Philippines, Zimbabwe, Ivory Coast, and Burkina Faso. That's how revolutions happen."

The audience was attentive, Dr Miguna excitable. The meeting was beamed live on Facebook and later uploaded on YouTube.

Knowing he had the room on tenterhooks, he descended into that dark, mystical alley inside his tummy where his lyrical, frosty self resides.

"And what does Miguna need?" he asked. The question was rhetorical, for he answered it in the next sentence.

"His mouth, and his head. And then you give me a platform, and I rally my boys, whether you like it or not."

After marshalling five million Kenyans into the streets of Nairobi, he said, all he needed to do was maintain the pressure for one week, and everything else would fall into place.

"You do that and Uhuru takes a flight to Congo," he promised.

Could he do it? Did he have the mettle to pull such a stunt?

Many believe he was just bluffing, carried away by his own sense of self-importance.

Still, this is one of the discussions Dr Miguna held abroad that aided in the cooking of his goose at Jomo Kenyatta International Airport in Nairobi last week, which led to the decision to deport him after 48 hours of absolute madness at the region's biggest and busiest airport.

He had always been a marked man though: He belongs to a proscribed organisation, had hammered the government thrice in the courts by getting orders for his release, and was quickly evolving from a raging lawyer to a firebrand, if not careless politician.

On Sunday, Ms Julie Soweto, one of the lawyers representing Dr Miguna, told the Nation that the confrontation at JKIA had gone "beyond incompetence", and that the government had gone personal on the lawyer.

"It is politics at play, and it now almost seems personal," Ms Soweto said.

"There is so much vindictiveness behind it that one cannot even put one's finger on it. Somebody seems to be very afraid of Dr Miguna.

"Why? How is it that the whole weight of government machinery is being used on one person, and we seem to be thinking that our law can't handle that?"

The official government position, so far, is that Dr Miguna had gone against the international and Kenyan laws governing airports, but Dr Miguna's abrasiveness and signs of not willing to play ball, even with Mr Odinga himself -- he stuck to his resistance call when Mr Odinga visited him at JKIA, against the ODM leader's call for a truce -- are said to have played a crucial role in his second deportation.

"It would have been a major breach of security had he been allowed in without stamping the passport he used to depart from Canada," Transport Cabinet Secretary James Macharia told Citizen TV on Thursday.

"It is criminal to use a different document. You cannot switch it regardless of your status."

In Kisumu on Sunday, Senate Minority Leader James Orengo called on President Kenyatta to intervene in the case.

"The buck stops with Uhuru Kenyatta. Violations of court orders must be redeemed by the President.

"It is such disobedience of the rule of law that made US President Donald Trump brand Africa with words that I cannot mention here," Mr Orengo said at Nyando.

Mr Orengo, who together with veteran lawyer John Khaminwa are leading Dr Miguna's legal team, also asked some of the opposition leaders from Nyanza to stop bashing the activist.

"I feel hurt when some MPs talk ill of Miguna," he said.

"He has called me names many times before, but we are not enemies. When he is in trouble, I won't abandon him."

In his continuous updates from Dubai, Dr Miguna has been calling on Kenyans to "demonstrate, make noise and demand that my birthright, constitutional and legal rights be respected and upheld".

And he, for the first time, on Saturday accused Mr Odinga of abandoning him.

In various interviews and events, Mr Miguna has insisted that the government fears his NRM because it is "uncompromising" and youth are "excited and radical".

He has worn this "radical" tag like a medal of honour, always urging youth, like all revolutionaries do, to rise against his pet subject -- the "despotic" regime of President Kenyatta.

While the government insists that his deportation, the second in two months, was due to his refusal to hand over his Canadian passport for stamping, Dr Miguna believes that he is being persecuted for staying the course. In between these two positions, the truth lies.