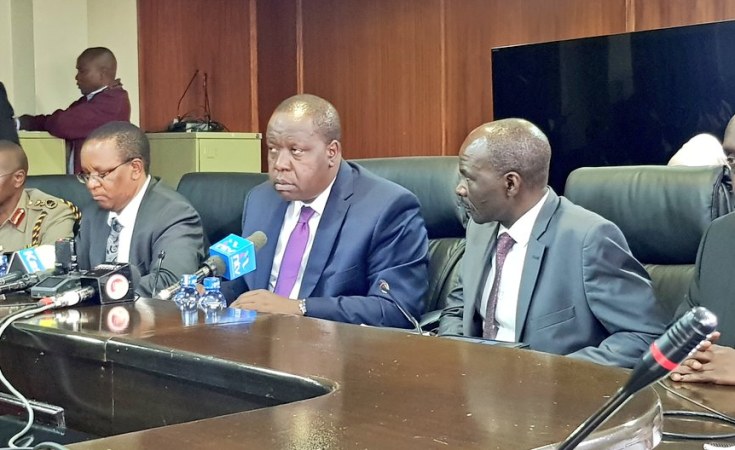 During the meeting at Continental House, Nairobi, Dr Matiang’i defended government’s handling for fiery lawyer’s case and the three-day drama that ensued at Jomo Kenyatta airport in Nairobi.

He used the opportunity to give the government’s side of the story in the denial of entry, mistreatment and deportation of Dr Miguna, who was born in Kenya, has a Kenyan identity card and is a naturalised Canadian.

Dr Matiang’i and Mr Boinnet last week failed to appear before the High Court to explain circumstances behind the re-deportation of Dr Miguna despite the court finding them guilty of contempt and fining them Sh200,000 each.

On Tuesday, he said he had not been served any High Court orders and denied Dr Miguna was re-deported.

The lawyer, he told MPs, was simply “removed from the airside at JKIA, not deported as he was not in Kenya”.

Dr Matiang'i said he was not serve any of the three High Court and claimed some judges, activist lawyers and civil societies were out to embarrass and intimidate government by through ex-parte orders.

Although he did not name any judge, lawyer or activist, the CS was categorical that courts were being misused to humiliate the executive.

He told MPs he had appealed contempt ruling against him and filed complaints against judges who have been handling Dr Miguna’s cases.

On the fate of Dr Miguna, who landed in Toronto on Monday, the CS said he free "to apply to regularise his Kenyan citizenship and return to Kenya any time he wants".

On his part, Immigration Principal Secretary Gordon Kihalangwa denied Dr Miguna was held in a toilet at JKIA, saying it was "a self-contained room with a bed and a toilet".

As the storm over Dr Miguna’s first deportation in February brewed, the government has been arguing that he acquired his Kenyan passport illegally in 2008, with the help of the then Immigration Minister Otieno Kajwang’ after several of his applications had been rejected.

The government has been arguing that since he acquired the Canadian passport at a time the Constitution did not allow dual citizenship, Dr Miguna was deemed to have been one of those Kenyans abroad who were required to apply for Kenyan citizenship when the current Constitution came into force in August 2010.

“Between August 27, 2010 and March 31, 2018, some 2,571 Kenyans had re-applied and regained their citizenship, now as dual citizens. But Dr Miguna is not one of them,” pro-Jubilee columnist Peter Kagwanja writes in his latest Sunday Nation column.

“In 2010, activists from the Party of National Unity (PNU) side of the coalition accused Dr Miguna of holding both Canadian and Kenyan passports criminally and pushed for his deportation because the law did not allow dual citizenship at the time. Dr Miguna argued that he was a Kenyan citizen by birth and that he had never renounced his citizenship,” adds Dr Kagwanja.

In court, the government has justified Dr Miguna’s second deportation to Dubai as necessary since the self-declared general of the National Resistance Movement refused to produce his passport when he landed at the Jomo Kenyatta International Airport last Monday.

Mr Jimmy Edwin Nyikuli, the legal officer in the investigations and prosecution section at the Immigration department, stated in an affidavit to the High Court last Wednesday that Dr Miguna could not be admitted into Kenya without producing his Kenyan passport.

The lawyer had only produced his national identity card.

“The national identity card is only acceptable as a travel document to and from Northern Corridor countries of Kenya, Uganda, Rwanda and South Sudan. Dr Miguna’s travel itinerary indicated he had not originated from any of these countries,” he wrote.

“Given the security situation that was obtaining at the time that was caused by the chaotic scenes and his insistence not to produce his travel documents, he was declared an undocumented person and the Emirates airline flight number EK719 was indemnified and compelled to return him to his country of last embankment,” added Mr Nyikuli.