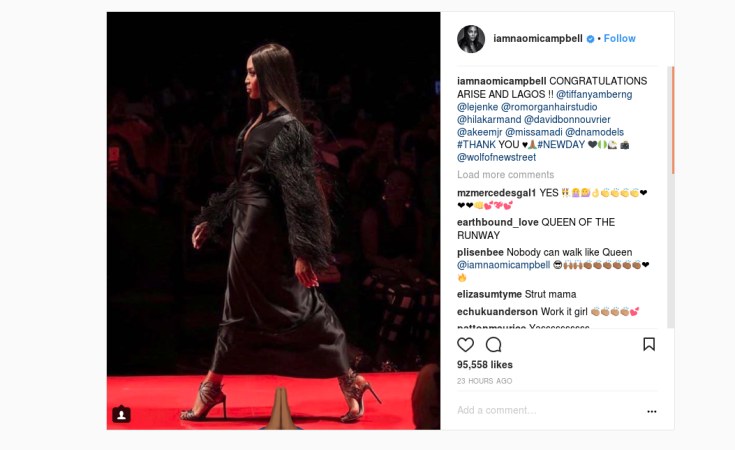 The fifth edition of the Arise Fashion Week, which began over the weekend at Lagos Continental Hotel, Victoria Island, ended on Monday night; but the memories linger on.

Ms Campbell opened the show on Saturday and strutted the runway clad in a gold fringe dress designed by Lanre Da Silva.

RMD on the other hand upped the ante when he stepped out in a royal regalia from Taryor Gabriels's Kimono Kollection.

From Ozwald Boateng to Taryor Gabriels, the runway also featured interesting and iconic pieces from over 40 designers from 14 countries.

The event kicked off on Friday with a meet-and-greet session with the headliner of the fashion show, Ms Campbell.

The much-anticipated fashion show then officially opened on Saturday night with breath-taking designs from top designers like Da-Silva, Abaya Lagos and About that Curvy Life.

Kicking off the show was Vonne Couture, owned by the Lagos-based fashion designer, Yvonne Nwosu.

Her collection comprised brightly coloured apparels with floral patterns, which is resplendent of the traditional Hawaii culture.

The About That Curvy Life Collective also made an appearance this year on Day 1, with Media Personality, Gbemi Olateru-Olagbegi, walking for FIA Factory and Tajé Prest for Sally Bawa.

Day 2 of the fashion event also featured musical performances by Seyi Shay, an interview session with Ms Campbell by Lola Ogunnaike and a short fashion film by Ozwald Boateng just before he closed the night with an amazing collection.

British rapper and fashion designer, Tinie Tempah, also showcased his 'What We Wear' collection for the first time in Lagos on Day 2.

Do you remember Olajumoke Orisaguna? She is the bread-seller-turned model who was scouted after she 'photo-bombed' a Tinie photo-shoot in Lagos in 2016.

To close the show, Tinie strutted the runway with Olajumoke to the delight of the audience.

Tinie's runway presentation was star-studded as it featured performances by British artiste Not3s, and Dice Ailes who closed the show with his hit song, Otedola.

Latasha Ngwugbe took the showcase a notch higher when her plus size models strutted the runway.

Under the fashion brand, About that Curvy Life, she celebrated 'big women' who are rarely presented the opportunity to walk the runway.

She also took a bold step by dressing the models in edgy and sheer garments that captured the audience's attention.

Spotting jumpsuits, kimonos, lacy sequined gowns, the plus-size models were cheered by the crowd as they walked the runway with confidence.

Abaya Lagos, a fashion brand that serves as the melting pot of Asian/Arabian fashion, also dazzled the audience with its cosmopolitan styles of Abayas and kaftans, accentuated by turbans and sunshades.

Expectedly, Lanre Da-Silva left the audience in awe with her collection, which was a delectable mix of gold colours and sheer elegant fabrics. 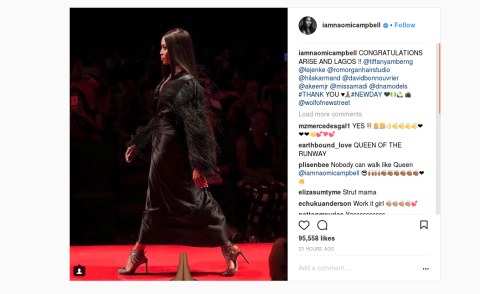 Come On Vogue, Supermodel Naomi Campbell Wants You in Africa!
Tagged:
Copyright © 2018 Premium Times. All rights reserved. Distributed by AllAfrica Global Media (allAfrica.com). To contact the copyright holder directly for corrections — or for permission to republish or make other authorized use of this material, click here.