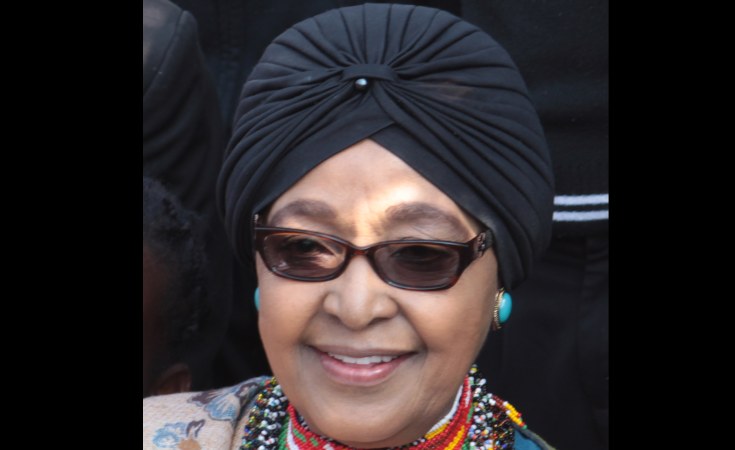 The history of South Africa's tortuous road to black majority rule in 1994 and the end of the oppressive Apartheid racial system of government can never be told without the mention of Winnie Madikizela-Mandela who died on April 2, 2018 at the age of 81. The ex-wife to Nelson Mandela, former South African President and the country's pioneer black leader was a fighter for most of her life, creating for herself a hallowed place in the pantheon of South Africa's liberation struggle. In spite of allegations of an extramarital affair, corruption and murder trials, Nomzamo Winifred Zanyiwe Madikizela remained a charming, intelligent, complex, fiery and eloquent personality whose international fame was inevitably linked to her marriage to the revered Nelson Mandela. Born in 1936 to a noble family of the Xhosaspeaking Pondo tribe in Transkei, Winnie's first name, Nomzamo - meaning "she who must endure trials" - was later to define her foremost role in fighting for black majority democratic rule in South Africa. Winnie commanded a natural constituency of her own among South Africa's poor and dispossessed, appealing to a broad segment of society. She was thrust into the limelight in 1964 when her husband was sentenced to life imprisonment on charges of treason. She was officially "banned" under draconian restrictions intended to make her a nonperson, unable to work, socialize, move freely or be quoted in the South African news media, while she raised their two daughters, Zenani and Zindziswa, alone.

While Mandela was held on Robben Island off Cape Town where he spent most of his 27 years in jail, Madikizela- Mandela served as liaison for his followers who hungered for news about his thinking and well-being. In the May 1969 crackdown, Winnie was arrested and held for 17 months, 13 of them in solitary confinement during which she was beaten and tortured. "This changed me and brutalized me so much that I knew what it is to hate," she later wrote. After blacks rioted in the segregated Johannesburg township of Soweto in 1976, Madikizela-Mandela was again imprisoned without trial for five months. She was later banished to a township outside the conservative white town of Brandfort in Orange Free State. Much to the dislike of the authorities, her cramped home became a pilgrimage site for diplomats and sympathizers as well as foreign journalists. Madikizela- Mandela broke many of her restrictions, using whites-only public phones and refusing to patronize segregated counters at the local liquor store. She was at Mandela's side when he was finally released from prison in February 1990. At the former president's funeral in December 2013, Winnie stood by the coffin in mourning black outfit - though Mandela had married Graça Machel in 1998 - six years after separating from Madikizela-Mandela and two years after their divorce. After the first democratic election in 1994' Madikizela-Mandela became a parliamentarian and was later appointed Deputy Minister of Arts and Culture by President Nelson Mandela. Winnie has been an MP ever since' despite limited appearances in Parliament in recent years. In April 2016, President Jacob Zuma awarded Winnie Madikizela- Mandela one of the country's highest honours - the Order of Luthuli - for her contributions to the liberation struggle and democracy.

Tagged:
Copyright © 2018 Cameroon Tribune. All rights reserved. Distributed by AllAfrica Global Media (allAfrica.com). To contact the copyright holder directly for corrections — or for permission to republish or make other authorized use of this material, click here.