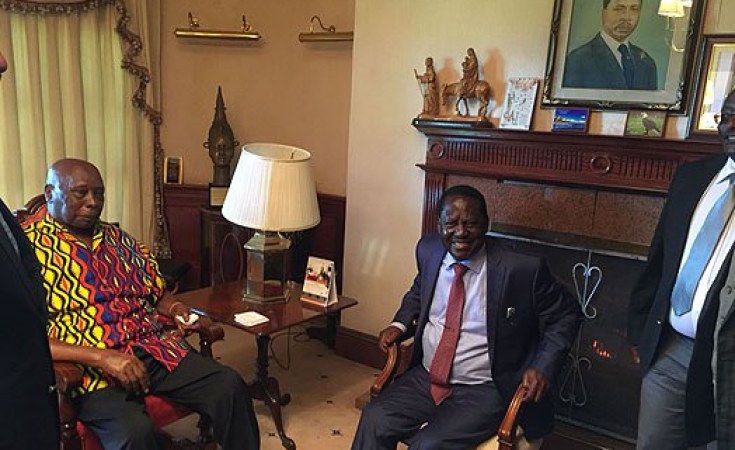 Nairobi — Political realignments in the country continue, weeks after President Uhuru Kenyatta agreed to work with the Opposition chief Raila Odinga, in an unexpected turn of events.

On Thursday, Odinga met former President Daniel Toroitich arap Moi at his Kabarak home, in the company of other leaders from his Orange Democratic Movement party.

According to a statement from ODM, the two leaders consulted on the current state of political affairs in the country.

"Raila Odinga today led a team of leaders from various parts of the country to pay a courtesy call to the former President H.E. Daniel Toroitich Arap Moi at his Kabarak home. The two leaders consulted on the current state of political affairs in the Nation," ODM tweeted.

This is the first time Odinga has publicly visited Moi for years since the long-term President left power.

Tens of leaders drawn from various political affiliations continue to meet Odinga, in affirmation of what he and President Kenyatta agreed.

"We discussed a wide range of issues relating to our journey as a nation," Odinga said after the meeting with the former Kiambu Governor.

He has also met foreign envoys ranging from the outgoing US ambassador Robert Godec, UK's Nic Hailey and a section of Nairobi business community.

The March 9, 'golden handshake' has for weeks calmed political temperatures, that had hit the brim after a pro-longed electioneering period, that left a tensed country.

Kenyans have for long been deeply divided along political affiliations that is largely drawn along tribal lines.

Even with that, there has been a fallout in the National Super Alliance (NASA) following the handshake.

Senator Moses Wetangula, who was the Minority Leader has since been ousted and his position taken by ODM Senator James Orengo.

Wetangula who says he was betrayed, has parted ways with a man he supported for the top job a few months ago.

Wiper leader Kalonzo Musyoka and ANC boss Musalia Mudavadi are also a disgruntled lot and have been calling for a genuine and all-inclusive dialogue.

Petitioner Seeks to Lock Out Odinga From Kenya's 2022 Polls
Tagged:
Copyright © 2018 Capital FM. All rights reserved. Distributed by AllAfrica Global Media (allAfrica.com). To contact the copyright holder directly for corrections — or for permission to republish or make other authorized use of this material, click here.