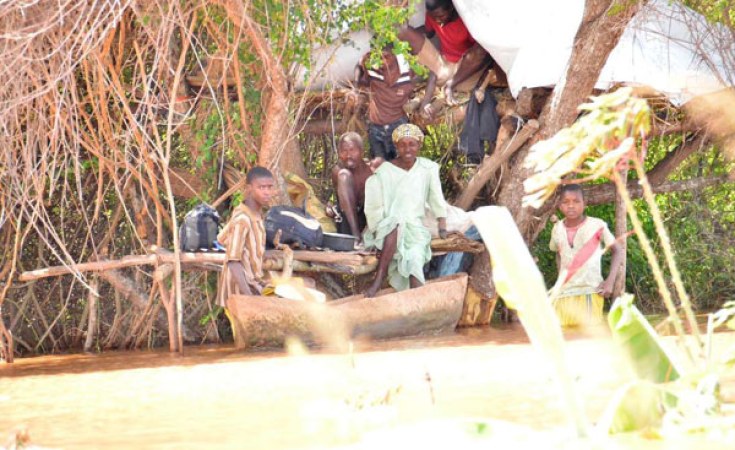 Photo: Stephen Oduor/Daily Nation
A family marooned by floods seeks refuge on trees in Tana Delta on April 22, 2018 as they wait to be evacuated.
The Nation (Nairobi)
By Waikwa Maina

The seven people have died after a car they were travelling in was swept by floods at Karati area in Kinangop Constituency.

The seven, including three women and four men, were from the same village in Naivasha, Nakuru County.

Their Probox car was swept away by floods along Naivasha-Njabini road on Sunday morning.

Njabini Deputy County Commissioner Joseph Nyameti said the Probox had nine passengers but two managed to jump out of the moving car.

The accident occurred at Karati village, about 15 kilometers from Njabini town.

Mr Nyameti said police suspected the driver lost control of the vehicle due to poor visibility as it was raining heavily.

“The accident happened along Githioro-Naivasha road past Githabai market. We suspect the driver lost control before hitting a culvert and rolled severally,” said Mr Nyameti.

Speaking at the scene of the accident, area an Administration Police boss Muthee Karani said: “We believe the occupants had hired the car and they were heading back home, the bodies were moved to Naivasha Sub-County Hospital mortuary, while the wreckage was towed to Haraka police station.”

Meanwhile, at least 100 families spent Saturday night in the cold after their houses were flooded in Karuturi area.

Flash floods, sweeping through the hilly Hells Gate, caught the families by surprise, forcing them to seek refuge at nearby entertainment joints.

A victim, Robison Ogwedhi said the water swept through their houses at around midnight.
"Unfortunately, most of the people including children, spent their night in a bar," he said.

Following the deaths, leaders on Sunday sent messages of condolence to friends and relatives of the seven victims who died Sunday morning along Kinangop-Naivasha road.

“I convey my condolences to the family and friends of the seven people who drowned at Githabai Ward-Midland junction this morning. I urge motorists to be extra careful during the rainy season and avoid unfamiliar roads,” said Governor Kimemia.
Mr Cherutich said it was unfortunate the Probox was overloaded.

“We urge drivers to be extra careful, do not gamble with your life or that of your passengers,” he said.

Death, Destruction as Kenya's Heavy Rains Continue
Tagged:
Copyright © 2018 The Nation. All rights reserved. Distributed by AllAfrica Global Media (allAfrica.com). To contact the copyright holder directly for corrections — or for permission to republish or make other authorized use of this material, click here.

Get Us Out of Here - U.S. to Evacuate Citizens Out of Africa
Children