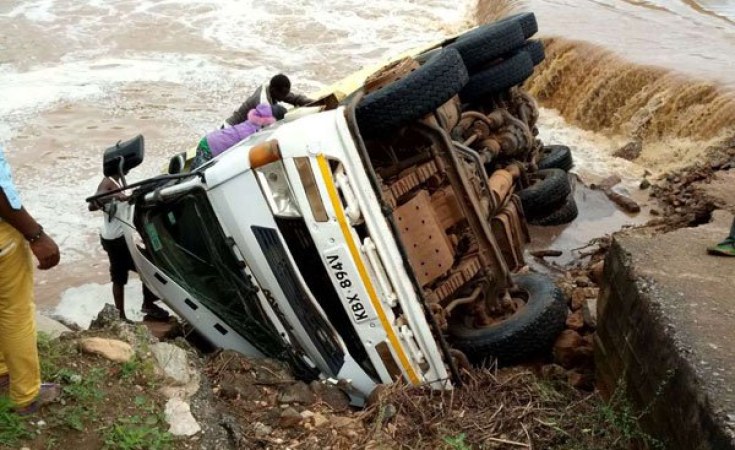 Photo: Charles Wanyoro/Daily Nation
A lorry overturned after a section of the road in Marivwe, near Ishiara market, Embu County, was destroyed by heavy rains on April 22, 2018.
The Nation (Nairobi)

Heavy rains continue to leave a trail death and destruction in several counties.

According to the Kenya Red Cross, three people died as a result of floods in Meru, Laikipia and Nyeri counties, while about 160 families in Nyeri and Kirinyaga counties had been left homeless after floods swept away their houses.

Central region Red Cross manager, Mugambi Gitonga, added that 40 goats have been killed by floods and thousands of hectares of farms destroyed in Nyeri County.

In Marsabit, about 50,000 people are stranded in several villages in Moyale after a road linking them to the border town was cut off by floods.

The residents of Dirdima, Illadu, Qualiwe, Funanyata Qolob, Godhe and Dabel villages, about 60 kilometres from Moyale town, are now on the verge of starvation following depletion of their food and water stocks.

"For 10 days now since floods washed away a section of the road, they have not been able to come to Moyale to buy food," said Hussein Guyo, a resident of Debel who had walked for over 10 hours to Moyale town.

In Tharaka-Nithi, the roof of a tea factory in Maara sub-county was blown off by strong winds on Saturday causing damage, while in Meru, several people were displaced.

"There are a lot of damages caused by floods including deaths of three people. We advise people living near rivers and on landslide prone areas to relocate to safer places," Mr Gitonga said.

He asked county governments in the region to continue helping those affected by the floods with food, shelter and medical services.

In Nyeri residents of Lamuria and Kiawara have been forced to seek refuge in schools after their homes were flooded.

"Our crops have been washed away. We had planted onions, cabbages and potatoes. Now we have nothing left," said Ms Mary Wambui, a resident of Lamuria.

Families living near River Ngarenyiro have now been forced to seek stay at friends' homes while others have been camping at the local Rurichu Primary School.

Deadly Floods - Anxiety as Kenya Schools Reopen
Tagged:
Copyright © 2018 The Nation. All rights reserved. Distributed by AllAfrica Global Media (allAfrica.com). To contact the copyright holder directly for corrections — or for permission to republish or make other authorized use of this material, click here.