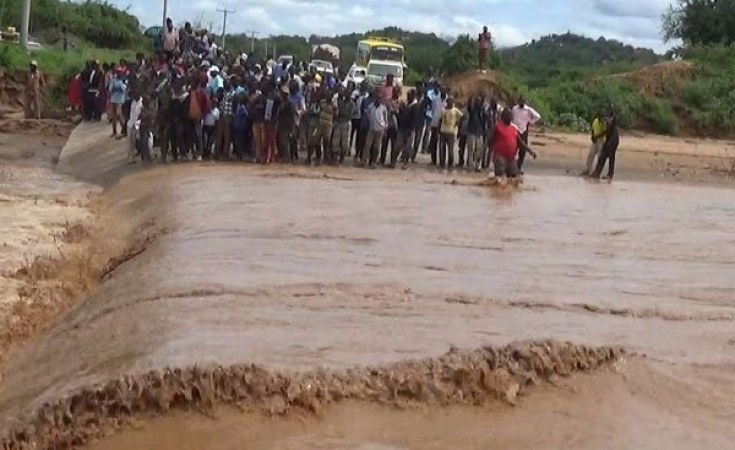 Nairobi residents woke up to traffic snarls and flooded roads as rains pounded the capital city on Tuesday morning.

The rains that pounded the city overnight left flood prone areas submerged, with emergency services concerned on the fate of people living near river banks and riparian areas.

A truck that rolled over early morning on Mombasa Road near the airport turnoff caused a traffic tailback all the way to Mlolongo.

07:48 Accident on mombasa road inbound just after the airport turnoff causing jam all the way to mlolongo..total madness on the road pic.twitter.com/7B3XK2Lldm via @Austinsapr

On the Eastern Bypass, a lorry rolled over on an underpass after hitting a ditch.

08:14 Accident at #EasternBypass underpass Superloaf Lorry just fell into a ditch and the driver hasn't been rescued yet Tell the driver's to approach with caution the roads are all flooded and there is heavy traffic pic.twitter.com/CPiyG0wgwT via @Sir_JRMuga

The Kenya Meteorological Services had over the weekend warned of heavy downpour in the city that will continue throughout week.

This is what Kenyans on Twitter had to say on the morning mess.

It's decided to rain non stop. And the way Nairobi is ugly when it rains. Hectic morning in 3,2,1...

Hapa kisumu naona jua limechomoza but Nairobi is mvua chungu nzima, don't complain about rain because that's a blessing if @ all you have no idea, and it also washes our tears imagine you're crying in the rain, no one will notice@Classic105Kenya@ItsMainaKageni#MainaAndKingangi

If there's one place that's never supposed to rain is Nairobi. Everything goes haywire.

Nairobi mpya Sasa,Sonko has made swimming pool available and accessible to all in less than five years... thanks to Mother Nature 'rain'@joeeinsteinogik @r_wasike @benjabali pic.twitter.com/Xz478KrYe5

Driving in Nairobi with rain falling is an expensive and a tedious task. Mbona hamkuniambia before I bought my third expensive LAND CRUISER V8?

Y'all talking about Kipchoge, Vivian etc... wait until you see people running when it starts to rain in Nairobi... they run the city man😂😂

Deadly Floods - Anxiety as Kenya Schools Reopen
Tagged:
Copyright © 2018 Nairobi News. All rights reserved. Distributed by AllAfrica Global Media (allAfrica.com). To contact the copyright holder directly for corrections — or for permission to republish or make other authorized use of this material, click here.