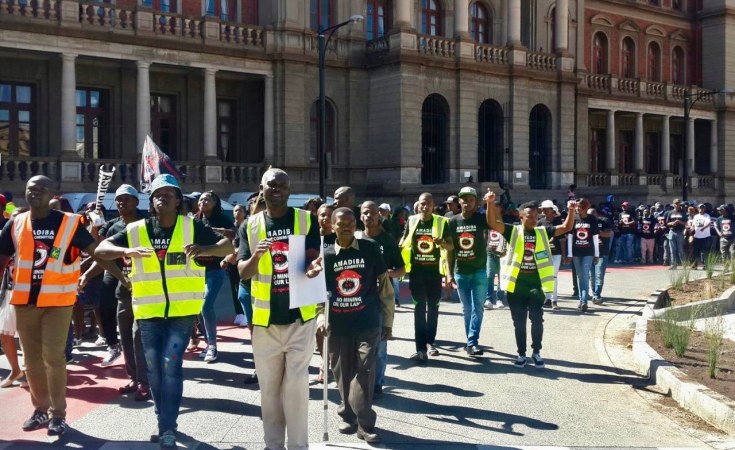 Photo: Zoë Postman/GroundUp
About 200 people from mining communities across the country picketed outside the Pretoria High Court on Tuesday in support of the Right To Say No to Mining Campaign.
GroundUp (Cape Town)
By Zoë Postman

The Department of Mineral Resources (DMR) failed to make a distinction between "legal deprivation and physical deprivation", the Pretoria High Court heard on Tuesday.

Advocate Tembeka Ngcukaitobi, representing the Amadiba Crisis Committee (ACC), was arguing that the consent of a community is needed before the Department can grant mining rights to a company.

The ACC has long battled to prevent Transworld Energy and Mineral Resources (TEM) from getting rights to mine titanium in Xolobeni, a village in Umgungundlovu on the Wild Coast. TEM is a subsidiary of Australian mining company MRC.

"Consent may come into play at a later stage, once the mining right has been awarded and the implementation phase begins, but consent is not required to grant mining rights," Maleka had told the Court.

But Ngcukaitobi said the award of a mining right constituted legal deprivation because the rights of indigenous people to the land were taken away.

"When the trucks actually come into the area and the implementation begins, that will be an extension of the legal deprivation into physical deprivation," said Ngcukaitobi.

Ngcukaitobi said Maleka's argument suggested that the community should wait for the mining trucks to come into the area, "then they must rush off to court and prevent the trucks from coming in because now [the mining company] needs their consent".

Ngcukaitobi said if the company already has mining rights, it is entitled to come on to the land. This is why, he said, the legal conditions should be decided before the mining trucks are allowed to enter.

Ngcukaitobi also said that granting mining rights before the legal conditions are decided would create "conditions of conflict". He said the community would defend their land when the excavation trucks from the mining company arrived.

"They will not wait for the actual deprivation to take place, which according to the state is the physical displacement," said Ngcukaitobi.

Although the case was scheduled to continue till Wednesday, by Tuesday afternoon both sides had concluded their arguments. The court adjourned and Judge Annali Basson said she would consult widely and take her time in making the judgment because it was an important case.

While the court was in session, about 200 people from mining affected communities across the country picketed outside the Pretoria High Court in support of the Right To Say No to Mining Campaign.

The National Coordinator for Mining Affected Communities United in Action, Meshach Mbahgula, told GroundUp that the picket was to show support for the Xolobeni community and other mining communities who have "suffered through the destructive nature of mines".

"We have seen from many other cases that the mines don't respect the land. They claim they will develop the area but the Xolobeni community have their own ways of developing like ecotourism, farming, fishing and so forth," said Mbahgula.

A memorandum was handed to the DMR which was received by the Deputy Director General.

Previous Story
Villagers Demand the Right to Say No to Mining in Their Community
Next Story
Community Consent Needed Before Granting Mining Rights, Court Hears 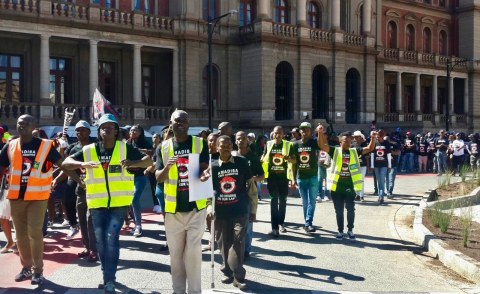 It's Dangerous to Oppose Mining in South Africa, Report Shows
Tagged:
Copyright © 2018 GroundUp. All rights reserved. Distributed by AllAfrica Global Media (allAfrica.com). To contact the copyright holder directly for corrections — or for permission to republish or make other authorized use of this material, click here.