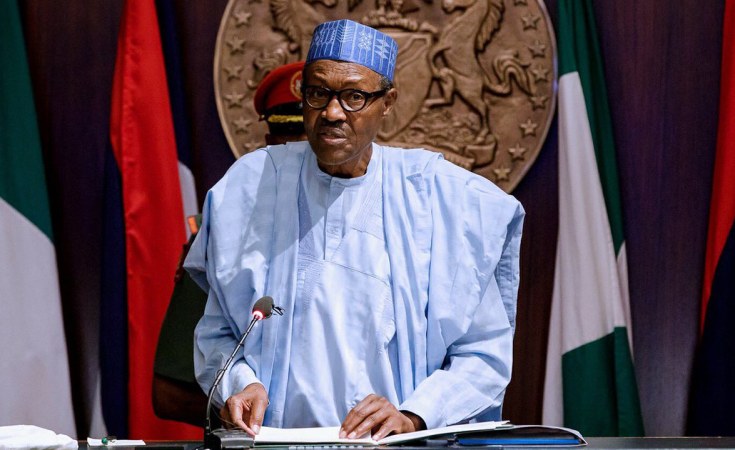 Bauchi — President Muhammadu Buhari has again re-echoed his decision to seek re-election in 2019, assuring his supporters that he is confident of winning.

Buhari who made the statement in Bauchi thursday while inaugurating 500 tractors and other farm implements procured by the Bauchi State government at the Abubakar Tafawa Balewa Stadium (ATBS), said he would seek re-election for a second term and win again because he "is a clean man and not corrupt like other past Nigerian leaders."

He pointed out: "Most Nigerian treasury looters have more than 20 to 30 houses yet some people in the country cannot afford even a single room to sleep in because poverty has eaten them up."

According to the president, "I don't have this type of mind to loot the treasury of Nigeria while people are suffering."

He vowed that he "will fish out looters and cheaters of the country, while all the funds recovered from them will be remitted into the national coffers."

President Buhari further encouraged parents to send their children to school to acquire western education, saying life would not be good without education.

He said: "Assuming I did not go to school, I will not be the President of Nigeria today. You should go to school, not because you want to work but to acquire knowledge for the future."

He further said: "Youths should not wait for government work because the government cannot do it alone; they should embrace farming. Farmers are the richest people in the country now and farming is the main focus of our government."

He commended Bauchi State Governor, Mohammed Abdullahi Abubakar, for using his bailout funds to clear salary arrears and ensure regular payment of salaries in the state.

In his remarks, Abubakar said the main objectives of distributing the 500 tractors to farmers were to boost rice and maize production in the state.

He recalled that Nigerians used to go outside the country to buy rice, but with these farm implements, farmers in the state would no longer suffer setbacks.

Earlier, the president who inaugurated a 60-bed Nigerian Air Force Reference Hospital, said the establishment of the special operation command of the Nigerian Air Force in Bauchi is in response to the current and emerging threat facing the country.

He stated that the special command which is co-located with the new hospital confirms the administration's collective commitment to tackling any threat to the security of the country.

According to him, "The air force remains a key component of the armed forces in its constitutional role of providing aid to civil authorities across the country. These efforts include surveillance, security airports, emergency assistance and resettlement of displaced people. These laudable efforts will continue in the interest of the country as it is our strategic goals to widen civil-military relationship."

Buhari said: "Counter insurgency efforts are bound to be enhanced by the location of the hospital because of its proximity to the theatre of operation", adding that it would reduce the hitherto long distance to 44 Nigerian Army Reference Hospital and Nigeria Air Force Hospital in Kaduna for casualties thus saving time for casualty evacuation.

He, therefore, urged Nigerian Air Force to put an adequate mechanism in place to ensure an enduring and optimal performance of the hospital, adding that it would eventually serve as a precursor to the resets list of Armed Forces Medical Services (AFMS) as envisaged in Defence policy of Nigeria.

Speaking earlier, the Chief of Air Staff, Air Marshal Abubakar Sadiq appreciated the president for the support that the Nigerian Air Force has enjoyed under his administration, saying: "It has undoubtedly positioned the service to effectively discharge his statutory responsibilities as provided in the constitution

The Chief of Air Staff said the effect of the president's support has manifested in the various theatres of operations especially in the geopolitical zones of the country.

No Going Back On Recovery of Looted Funds - Buhari