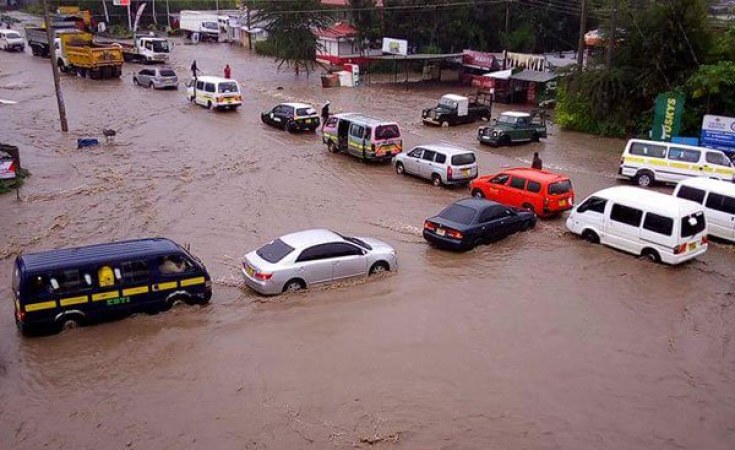 One person drowned on Sunday in Mandera County as heavy rains and floods continued to wreak havoc across the country.

This came as authorities also confirmed the recovery of bodies of three people swept away on Saturday while trying to cross swollen rivers in Machakos and West Pokot counties.

These are the latest statistics on the mounting death toll caused by floods and heavy rains that have also left a trail of destruction on homes and infrastructure across the country in the last few weeks.

In Mandera, Mr Adawa Haji Ahmed, a senior county official, said the death was reported at Ethole, bringing the total number of the deaths in the region to three.

"Most of houses there have been submerged, but our team from the department of Roads and Public works is on the ground for emergency intervention," he said.

Mr Ahmed said food and non-food items such as mosquito nets and bedding would be taken to the affected residents now living in camps.

"Their bodied have since been retrieved and taken to Yatta Funeral Home in Kithimani town," the police boss said on Sunday.

In Pokot Central, the body of a young man, 16, was recovered on the banks of river Chepera at Karapogh by residents on Sunday, days after being swept by flash floods while working at his father's farm.

Meanwhile, more than 159,000 people in Tana River, Kilifi and Lamu counties have been displaced by floods.

Tana River County is the most affected, coming after River Tana broke its banks almost two weeks ago, affecting some 150,000 people.

Politicians and government officials urged the national government to intervene and save the affected.

Tana River Deputy County Commissioner Michael Kioni said the displaced were mostly in camps and living with their relatives after floods destroyed their houses and farms.

He ordered chiefs to forcefully evacuate residents who are living in flooded areas.

"Those who will resist will be prosecuted for attempted suicide.

"Residents still residing in lowlands and along the banks of River Tana should move out. More water is still flowing downstream from the Seven Folks dams," he said.

Speaking at Bondeni village during the distribution of relief supplies to flood victims on Saturday, Mr Kioni said a county steering group meeting held earlier in the day had established that about 38,000 households had been affected by the floods.

Most of the displacements are in Tana North Sub-County where about 16,000 households have been affected followed by Tana Delta Sub-County (14,000) and Tana River Sub-County (8,000), he said.

He said some areas had been completely cut-off and the victims could not be reached by road, which have been rendered impassable by the floods.

Meanwhile, Wayu Ward Representative Sadaam Hussein has appealed to the national government to fully intervene and take relief food to residents of Wayu and Waldena.

In Kilifi County, nearly 6,000 flood victims camped at Garashi Secondary School in Magarini after being driven out of their homes when river Galana-Sabaki broke its banks.

Last Thursday, the Kenya Defence Forces joined the Kenya Red Cross staff, police and other humanitarian agencies in rescuing residents who had been marooned by floods in Garashi and Kakuyuni wards. Governor Amason Kingi has for the last two days toured as rescue efforts continued.

"The county government will send in bowsers with fresh water for the residents. The flood destroyed boreholes and water pumps at Baricho in Malindi, which supply water in the county and Mombasa," Mr Kingi told the residents.

Magarini MP Michael Kingi has appealed to well-wishers for food, funds and other materials that would enable the affected residents to rebuild their homes.

The same dire situation was being witnessed in Makueni County.

"We are facing a real disaster. I have personally witnessed acres of crop that have been flattened and water pipelines that have been uprooted," he said on Friday, while announcing the formation of an interdepartmental team to spearhead rescue and relief efforts.

"The damage so far is estimated at Sh300 million on water resources alone," Prof Kibwana added.

The governor, who cut short his stay at last week's devolution conference in Kakamega County to attend to the crisis back at home, met Senator Mutula Kilonzo Junior and area ward representatives to chart the way forward on tackling the flooding menace.

The governor and Makueni Woman Representative Rose Museo visited the affected areas on Thursday and Friday and distributed blankets, mattresses and food items to the victims.

Kenya Flood Victims Appeal for Condoms, Contraceptives
Tagged:
Copyright © 2018 The Nation. All rights reserved. Distributed by AllAfrica Global Media (allAfrica.com). To contact the copyright holder directly for corrections — or for permission to republish or make other authorized use of this material, click here.