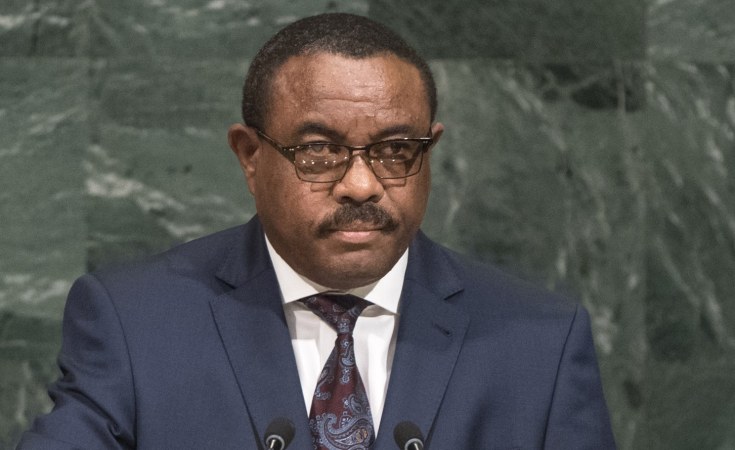 The Former Ethiopian Prime Minister Hailermarian Desalegn has called on South Sudan's President, Salva Kiir, who is struggling to uphold power, to quit politics and give others a chance, Sudan Tribune reported.

Hailermarian unexpectedly resigned on 15 February 2018, saying he hoped to end years of unrest and political turmoil in Ethiopia, after ruling the country for six years.

The former premier who also was the chair of the East African bloc IGAD that mediating the peace process made his remarks at The Ibrahim Governance Weekend organized by MO Ibrahim Foundation held in Kigali Rwanda on Saturday.

Speaking about the need for peace in South Sudan he regretted the non-implementation of the IGAD-brokered peace agreement by the South Sudanese leaders.

"Immediately after my resignation, I asked them 'Please would you resign because you failed to resolve the problem in South Sudan," according to the report.

"Leaders have to come to their senses to their mind and they should somehow leave so they give power to new young leadership that can continue to the next step," he added.

Hailemariam , however, said everybody has to help to end the war in South Sudan including the African Union and United Nations, "The UN should take aggressive action," he emphasized.

Speaking about Ethiopia, the ex-Premier Hailemariam said he resigned because his country has a problem of addressing multi-ethnic society, and there is a need for deep reform. "So I said, I have to set aside myself in order to achieve these deep reforms."

"The main problem in African politics is people stick to power. And I wanted to show that it is possible that you can leave while having power as a citizen in my country," he stressed.

South Sudan's embattled President, Salva Kiir Mayardit, has been signaled by many to leave power but he says he "has no incentive" to bring peace and resigns

Tagged:
Copyright © 2018 Ethiopian News Agency. All rights reserved. Distributed by AllAfrica Global Media (allAfrica.com). To contact the copyright holder directly for corrections — or for permission to republish or make other authorized use of this material, click here.