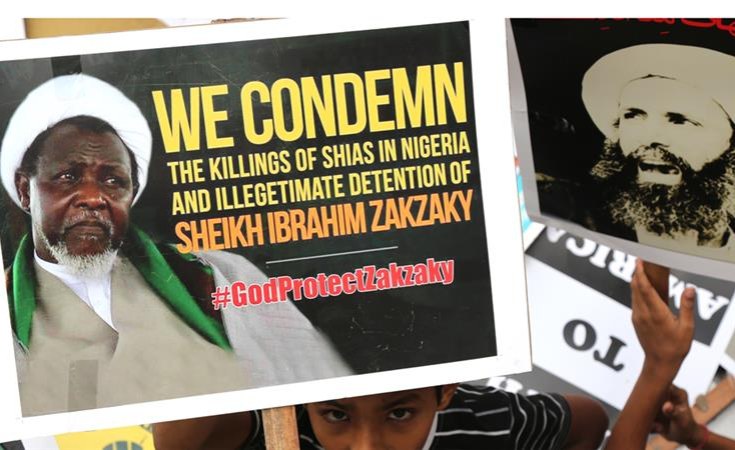 A judicial advocacy group, Access to Justice, has criticised the Kaduna State Government over its decision to file criminal charges against the leader of the Islamic Movement of Nigeria (IMN), Ibrahim El-Zakzaky.

Mr El-Zakzaky and three others are facing an eight count charge of homicide linked to the December 2015 clash between the Shi'ite group and officers of the Nigerian Army.

At least 348 members of the Islamic group and one soldier died during the clash as the former allegedly blocked the convoy of the Chief of Army Staff, Tukur Buratai.

"The commitment of the Kaduna government to pursuing after justice for one life lost in the clashes between the army and IMN members, and not for more than 348 persons, is blatantly immoral, constitutionally and ethically, and repugnant to every precept of a democratic government," Joseph Otteh, Director, Access to Justice, said in a statement on Sunday.

"It is a revulsive and reviling social apartheid policy that ranks one life intrinsically superior to an aggregate of others. It is a horrifying expression of prejudice and disdain against persons on account of their association.

"Our government now cherry picks the lives, the rights and the people it would defend, and those that are, in its opinion expendable."

Joined as defendants alongside Mr El-Zakzaky in the suit are Zeenah Ibrahim, Yakubu Katsina, and Sanusi Kokori.

According to the prosecution, the defendants are charged with offences ranging from road blockages with dangerous weapons, homicide, unlawful assembly, and blocking roads to prevent movement of the convoy of the Chief of Army Staff.

The Justice Mohammed Garba Judicial Commission of Enquiry (JCE) set up by the Kaduna State Government to investigate the incident found that at least 348 members of the IMN were killed during the clashes and buried in secret mass graves.

In its report, the commission noted that, "The force used by the Nigerian Army resulting in the death of the 349 IMN members was disproportionate."

While the JCE recommended the prosecution of IMN members who were "involved in the killing of Cpl. Dan Kaduna Yakubu", it indicted the General Officer Commanding the Nigerian Army 1st Division in Kaduna, Adeniyi Oyebade, a Major General, and A.K. Ibrahim, a Colonel, who led the operation that culminated in the deaths of IMN members.

The commission further recommended the criminal trial of both officers as well as the trial of other army officers "who partook in the killings" while noting that: "The high number of casualties cannot be justified".

Mr Otteh said although the Kaduna State Government had begun prosecution of 259 Shi'ite members for the murder of the soldier, Kaduna Yakubu, a corporal; no soldier had been brought to trial for the killings of hundreds of IMN members despite the recommendations of the JCE.

"The leader of IMN Sheik El Zakzaky, who has lost two of his sons to earlier killings by the military in Kaduna in 2014, has been in detention since December 2015, without charge, and in spite of court orders for his unconditional release," he said.

"It is deeply unfortunate and troubling that the Kaduna government has now elevated to an instrument of state policy, the bare-faced social injustice of turning victims of a vicious, brutal murderous aggression into its perpetrators, and treating the aggressors as victims and using the resources of the state and tax payer money to pursue these reprobate discriminatory and recriminatory prosecutions.

"This is an ominous, foreboding cloud hanging over the rule of law in Nigeria. Our fundamental values as a constitutional democracy are being gravely threatened and imperilled.

"The Kaduna government does not have a moral or constitutional right to arraign El Zakzaky and others for homicide trial when it is not ready to prosecute and bring to justice, also, soldiers who summarily, wilfully and atrociously killed hundreds of Nigerians at their pleasure."

Nigerian Shiite Leader's Bail Application Postponed Till August
Tagged:
Copyright © 2018 Premium Times. All rights reserved. Distributed by AllAfrica Global Media (allAfrica.com). To contact the copyright holder directly for corrections — or for permission to republish or make other authorized use of this material, click here.