Payments will range from R50k to R500k for survivors of silicosis and TB, or dependents of those who have died.

This is the first class action settlement of its kind in South Africa and follows three years of extensive negotiations between the representative attorneys and the OLD Working Group.

National Director of the Legal Resources Centre (LRC) Janet Love, said: "This settlement marks the end of a long road for the LRC, starting in 2003 which led to the Blom/President Steyn Mine silicosis litigation. The Blom/President Steyn Mine matter was the first case on silicosis in South Africa. It served as a test case to establish the liability of Anglo American SA as a parent company. It laid the foundation for Mbuyisa Neale and Leigh Day to negotiate the establishment of the Q(h)ubeka Trust in March 2016 and it provided the primary evidentiary basis to launch the class action."

Attorneys for the victims of occupational lung disease have issued joint press releases with the OLD Working Group explaining some of the terms of the settlement. The parties point out that it is still conditional upon widespread consultation with victims of lung disease and their representatives all over the sub-continent, and thereafter approval and registration of the Trust Deed by the South Gauteng High Court in terms of its class action certification judgment, against which there are now no surviving appeals from the mining industry.

The essence of the still-to-be-ratified settlement and Trust Deed is as follows:

There are ten classes of claimants who, once properly certified, will be eligible for a benefit as follows: (Note: ODMWA = Occupational Diseases in Mines and Works Act)

1. Silicosis Class 1: R70,000; This is an early stage of silicosis (lung function impairment of up to 10%) which is not compensable in terms of ODMWA.

4. Silicosis Class 4 with defined special aggravated medical condition: a special award of up to R500,000. This category provides relief to a small number of claimants who are suffering from extraordinary disease conditions which exceed most other silicotic claimants. There is no equivalent ODMWA compensation category.

5. Dependant of a deceased eligible silicosis claimant who died between March 1965 and the effective date: R100,000, where silicosis is deemed to be the primary cause of death.

6. Dependant of a deceased eligible silicosis claimant who died between 1 January 2008 and terminating on the effective date, where the deceased had the condition referred to in 2 or 3 above: R70,000.

Guestimates for the numbers of potential beneficiaries (excluding their dependants) have varied over the years of the litigation from 100,000 to 500,000. Academic analysis of the epidemic of occupational lung disease amongst black mineworkers since the 1980s is currently underway, using the millions of records held by TEBA, the inheritor of the colonial-era migrant labour recruitment body for the gold industry set up by the Chamber of Mines in the early part of the 20th century, and other data sources bearing witness to the extent and growth of the epidemic.

South African "white" mineworkers who fell victim to quartz dust in the colonial era were always well-provided for by both the apartheid authorities and the gold industry.

The enormous task of finding victims, medically examining them, and paying them or their dependents lies ahead.

For details on the Q(h)ubeka Trust established by the Blom/President Steyn Mine settlement, see: 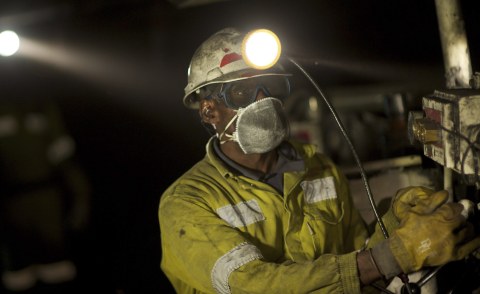 South African Miners Suffer Setback in Silicosis Case
Tagged:
Copyright © 2018 GroundUp. All rights reserved. Distributed by AllAfrica Global Media (allAfrica.com). To contact the copyright holder directly for corrections — or for permission to republish or make other authorized use of this material, click here.