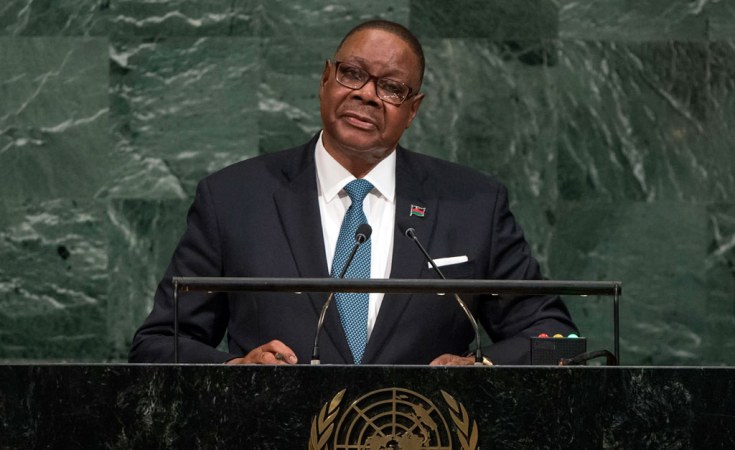 Zomba — President Professor Arthur Peter Mutharika said on Saturday that government and the church should strive at promoting unity of common purpose and mutual respect for one another in eliminating the prevailing moral decadence affecting this country.

Mutharika made the remarks at the Zomba Gymkhana Club ground during the Zomba Theological College (ZTC) commemoration of 40 years anniversary under the theme: 'Christ Is All in All.'

He said the church should provide spiritual support to change people's mindset for the country to achieve meaningful progress in development.

"It is imperative that religious leaders should champion unity of purpose both in the church and outside the church. We need to share a common purpose because we are all equal before the eyes of the almighty," Mutharika said.

He assured the nation that government would not condone any form of violence because it is the source of instability.

The president, therefore, asked religious, political and traditional leaders to take a leading role in fighting social issues including the abduction and killing of albinos.

"The church in particular should continue with its moral responsibility of being the source of light and justice," he said. "We all need to be agents of the change the nation so much desires."

During his speech, Mutharika announced that the first couple had contributed K3 million towards the ZTC Development Fund to enable the college overcome some of its challenges affecting the institution's operations.

Chairperson of the ZTC Board of Trustees, Rev. Masauko Mbolembole said the institution has been influential in training pastors in Malawi and from other countries such as Zambia and Zimbabwe.

He commended government for providing a policy guidance for the management of tertiary education and said their institution would continue providing quality education despite facing a number of stretching challenges.

Mbolembole cited the lack adequate infrastructure which he said was limiting the college into admitting many students in its programmes.

"The infrastructure at the college cannot accommodate more people - the need out there for the training in pastoral work is so enormous," he said, pledging that the college would continue to instill high standards of dignity and integrity to serve the flock better.

Rev. Mbolembole, who is also moderator for Blantyre Synod of Church of Central African Presbyterian (CCAP), called on all wishers to support the college to fulfill its mission of contributing to spiritual growth of people the country.

ZTC was established by the CCAP General Assembly in 1977 with five synods namely Blantyre, Nkhoma, Livingstonia, Zambia and Harare.

Tagged:
Copyright © 2018 Malawi News Agency. All rights reserved. Distributed by AllAfrica Global Media (allAfrica.com). To contact the copyright holder directly for corrections — or for permission to republish or make other authorized use of this material, click here.