A panel will be appointed to review the functioning, effectiveness and structure of South Africa's intelligence bodies, President Cyril Ramaphosa announced when he answered questions in the National Assembly on Tuesday.

Responding to a question from Cope MP Deidre Carter, Ramaphosa said he stated during his State of the Nation Address that restoring the integrity of public institutions would be a government priority.

He said he was "deeply concerned" about allegations of corruption in the intelligence community.

Ramaphosa added that he had instructed Minister of State Security Dipuo Letsatsi-Duba to take whatever steps necessary to restore the integrity of the State Security Agency (SSA).

Similarly, he instructed Minister of Police Bheki Cele to do the same at the police and he has already appointed a head of crime intelligence - Major General Peter Jacobs.

He said the Joint Standing Committee on Intelligence and the Inspector General of Intelligence - which oversee South Africa's intelligence bodies - must be empowered to do their work.

In a follow-up question on behalf of Carter, Cope leader Mosioua Lekota asked what guarantee Ramaphosa could give that the intelligence services would turn the corner, as it happened under his watch, while he was deputy president.

"The guarantee I can give you as we're going to do this review process, is that we're going to keep an eye on the Constitution and what is best for our people," Ramaphosa answered.

He pointed out that South African Revenue Service commissioner Tom Moyane was suspended, but Fraser moved to another department, that of correctional services.

"Why is Mr Fraser given preferential treatment?" Maimane asked. "He should be in correctional services, not running one."

Ramaphosa said the DA took the matter to court and, while he would like to engage him on the matter, he would now have to "provide that answer through court papers".

DA chief whip John Steenhuisen said the "sub judice excuse" was invalid. He said Maimane's question wasn't about the merits of the case, but about why Fraser was treated differently to Moyane.

Ramaphosa said he had to take into account the "sensitivity of intelligence".

"What does he (Fraser) know?" interjected someone from the DA benches.

Ramaphosa said he thought it best to move Fraser out so that the review panel can get into "the depths of issues" at the SSA, which would include the allegations against Fraser.

In an answer to a follow-up question from ACDP MP Steve Swart, Ramaphosa said the review would "not prevent any investigation already under way from proceeding".

Ramaphosa Says He Will Defend Opposition's Maimane Against His Own Party 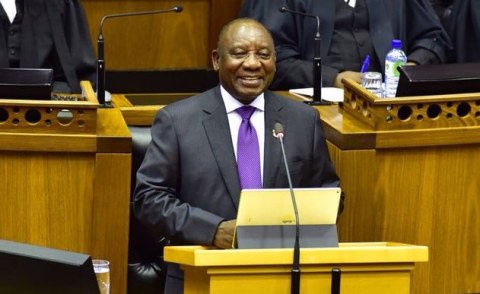 President Ramaphosa Loses His Cool in South African Parliament
Tagged:
Copyright © 2018 News24Wire. All rights reserved. Distributed by AllAfrica Global Media (allAfrica.com). To contact the copyright holder directly for corrections — or for permission to republish or make other authorized use of this material, click here.