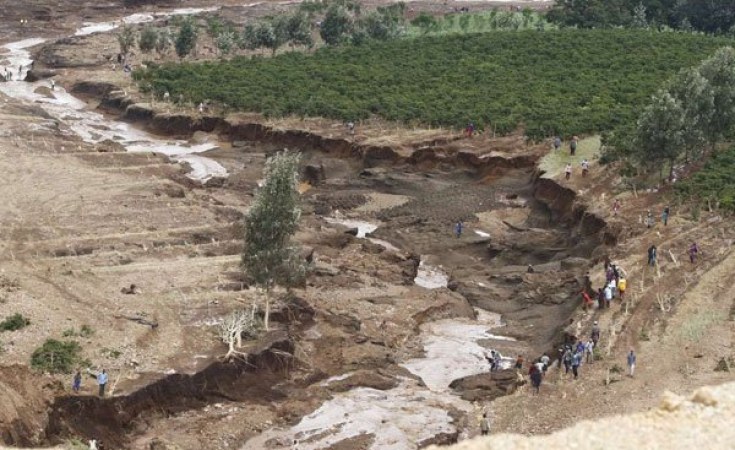 Photo: Ayub Muiyuro/Daily Nation
This image taken on May 10, 2018 shows the damage caused by cascading water after Patel Dam in Solai, Nakuru County, burst its banks.
The Nation (Nairobi)

The rumble at about 8pm on Wednesday sounded like a faint clap of thunder.

Elija Chege stepped out of his single-room house at Energy Village in Solai, Nakuru, to check what was happening as the sky had been clear just a few minutes earlier.

Then he heard the rumble; loud, louder, and ominous. It did not sound like the usual cacophony of rain drops on the greenhouses of Patel Coffee Estates behind the hills.

This was a strange rumble, and it was shaking the soft earth under his feet.

The village erupted in chaos as the 41-year-old mason and his neighbours ran for their lives, some towards Solai Shopping Centre, others in the opposite direction.

"We didn't know what to do, or what we were running away from," Chege told the Nation in the village on Thursday as the gravity of what he had escaped from started sinking in.

Energy Village, the small farming village he has called home for years, is no more.

The rumble Chege had run away from was 70 million litres of water cascading towards him and his neighbours after a private dam used by Patel Coffee Estates burst its retaining walls.

Some managed to escape, many others didn't.

Officials from the Water Resources Management Authority told the Nation only about 10 million litres of water was retained as 90 per cent of the dam's volume poured downstream towards Energy and Marigu settlements.

A statement by the National Disaster Management Unit Deputy Director Pius Masai puts the number of dead locals at 44, 41 are admitted in hospital and 40 are missing.

The village hosted about 60 homesteads on plots measuring an eighth of an acre each, and was home to hundreds of casual labourers who earn a living from the coffee estate irrigated by the dam, the flower farms that dot Solai, and other plantations.

As the 70 million litres of water hurtled towards the residents, it formed a powerful wave about a metre-and-a-half high which swept away everything in its 500-metre-wide path.

TRAUMAThe destruction was buried by the eerie dark of the Wednesday night, but became evident when the sun shone its light on Solai Thursday morning.

Cars had been swept away and slammed into buildings which were, in turn, washed away to their foundations.

"This will haunt me for a long time," John Mbuthia, who ran a shop at Solai trading centre, said.

"I saw it happen because I had just closed my shop and was heading home when the dam burst its walls. I took off and watched from a distance as the water swallowed my premises."

Rongai police boss Japhet Kioko said emergency workers had spent the night combing through engulfed houses to rescue those trapped and retrieve the bodies of the victims.

"We found 11 bodies buried in mud at a coffee plantation," he said.

"We suspect they were trying to escape from the deluge when they were swept away. Most of them were women and children who probably could not run fast enough, and the elderly."

About 47 people were rescued from the mud and taken to local health facilities, including Bahati Sub-County and Nakuru Level Five hospitals, where they are recuperating.

Nakuru Governor Lee Kinyanjui, who camped at the scene since Wednesday night, condoled with the victims' families, saying the county government will do its best to evacuate affected families and assist victims get medical attention.

1. The Banqiao hydroelectric dam in China tragedy of August 8, 1975: The destruction, as a result of Typhoon Nina, killed 26,000 people, but the figure rose to between 171,000 and 230,000 following disease outbreaks and famine after the event.

More than 300,000 domestic animals and as many as 5.9 million buildings were destroyed.

3. Malpasset dam disaster in 1959 in France killed 423 people, with the town of Frejus completely flooded and the damage estimated at Sh6.8 billion.

7. Fuhe River dam disaster in China in June 2010 affected 29 million people, killed 199 and 123 were reported missing. Its damage was valued at Sh622 billion.

20 Children Among Those Confirmed Dead in Dam Collapse 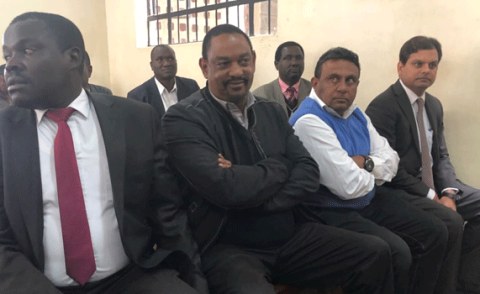 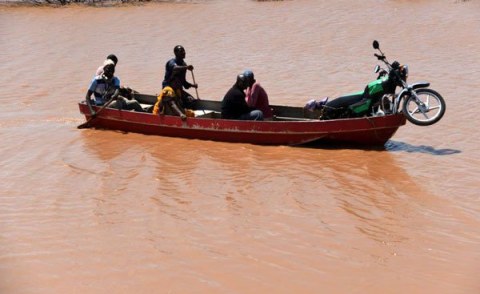