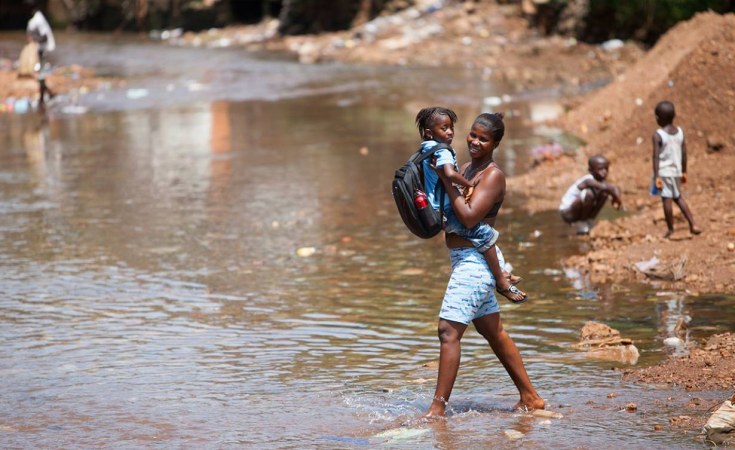 Freetown — Kadiatu Koroma only narrowly escaped the mudslide that engulfed her home in Sierra Leone's ramshackle capital last August, killing an estimated 1,000 people in one of the worst flooding-related disasters to hit Africa in living memory.

Koroma had already left for work when tons of mud and rocks crashed down onto her poor community in the shadow of Freetown's Mount Sugar Loaf, killing her sister and her newborn baby.

Like many in the poor West African nation, she had no choice but to live in a place where experts had long warned that deforestation and rampant construction could bring disaster - and where many fear it could happen again as heavy rains become more severe due to climate change.

"Who would live in an area that is disaster prone if they knew and valued their life?" she told the Thomson Reuters Foundation in a camp for homeless victims of the disaster.

Originally built for 400,000 residents, Freetown has mushroomed since Sierra Leone won independence from Britain in 1961, and is now home to an estimated 2 million people.

People flocked to the city during the decade-long civil war that ended in 2002 and the rampant, unplanned construction that followed led to destruction of the forests that offered vital protection against mudslides.

Many experts believe the mudslide was a manmade disaster and warn of worse to come if urgent action is not taken.

"I think what we saw is just the beginning," said Bala Amarasekaren, a conservationist who founded Tacugama Chimpanzee Sanctuary in the hills above Freetown in 1995.

"I am very, very scared. I know this area well and there are many areas that are even more vulnerable than the place that collapsed."

Amarasekaren said the forested slopes that surround Freetown once provided natural protection for the city, but have now been denuded for largely illegal construction.

"The forest plays a huge role in terms of protecting our water ways, protecting the slopes, and if you start destroying that eco-system you're basically inviting problems such as those that led to the landslide," he said.

Emergency workers in Freetown pulled the bodies of about 500 victims from the mud but hundreds more are still missing. The final death toll, estimated at 1,000, may never be known.

Another 3,000 people were made homeless in the city, which is buckling under the weight of a growing population.

A fifth of the population now lives in slum conditions with no sewerage or basic services, according to the United Nations, while 60 percent live on less than $1.25 a day.

Alaphajoh Cham, deputy director of policy and planning at the land ministry, said unplanned construction was a legacy of the war-era influx of people to the capital.

"Urbanisation is good if you are able to manage it very well," he told the Thomson Reuters Foundation.

"The stark reality is that we stopped planning for decades; planning has never been a priority.

"Unfortunately, the government is not in a position to effectively manage development control."

Abdul Karim Marah, Freetown City Council's development and planning officer, said structural plans for the city had been drawn up but never implemented.

"We have so many documents which could inform whomever is interested in bringing about decency and change in regards to the problems of environmental challenges in Freetown," he said.

"It's a question of putting them into practice."

New Mayor Yvonne Aki Sawyerr said Freetown's location, sandwiched between the sea and the mountains, compounded the difficulty of accomodating an expanding population.

"Freetown is a city of just over a million people living on 357 square kms of land," she said in an email interview. "A lack of urban planning, inadequate housing and poor sanitation is negatively impacting the living conditions, health outcomes and employment prospects of many of Freetown's residents."

Freetown has been plagued by heavy rains and flooding yearly since 2008, and was still reeling from an Ebola epidemic that killed 4,000 people when the mudslide struck.

Conservationist Amarasekaren believes climate change is also taking its toll on a city that suffers heavy rains every year.

"Climate change is global," he said. "What you're doing in the United States or England is coming to affect us. Maybe in August we used to get 30 inches (76 cm) of rain; because of climate change, now we're getting maybe 300 inches."

In the city's low-lying Congo Town slum, where small shacks are crammed haphazardly together and a lack of proper sewerage systems means a strong stench fills the air, community leader Idrissa Kargbo said floods were a regular hazard.

Nowadays, the rainy season tends to be briefer but more intense, bringing greater risk of flooding, he said as he pointed to the damp stains at head height on the wall. 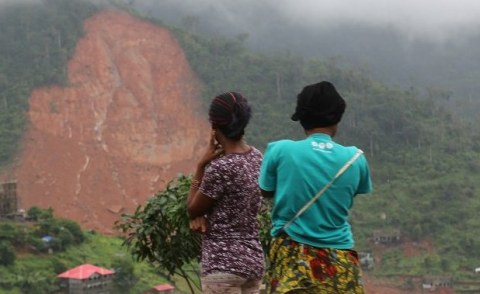 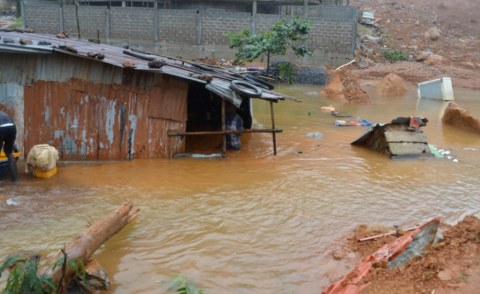 What Caused Sierra Leone's Landslides?
Tagged:
Copyright © 2018 Thomson Reuters Foundation. All rights reserved. Distributed by AllAfrica Global Media (allAfrica.com). To contact the copyright holder directly for corrections — or for permission to republish or make other authorized use of this material, click here.