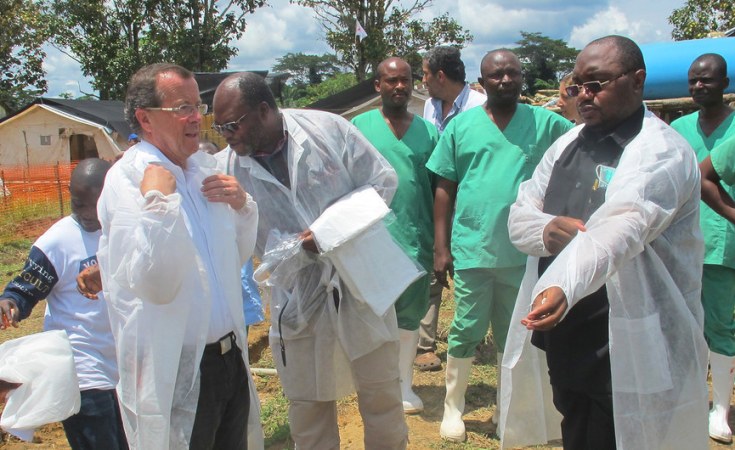 Photo: MONUSCO/Jesus Nzambi
A UN representative and DR Congo officials examine the impact of the virus in 2014.
Voice of America (Washington, DC)

The World Health Organization said Friday it is preparing for "the worst case scenario" for an Ebola outbreak in the Democratic Republic of Congo.

WHO said Thursday that between April 4 and May 5, twenty-seven cases of fever with hemorrhagic signs, including 17 deaths, were reported in the DRC's Bikoro district. WHO says two of the cases tested positive for the Ebola virus.

The DRC Ministry of Public Health has requested WHO's support in coordinating the international and NGO response to the health crisis.

The full extent of the outbreak is not yet known, according to WHO, and the location presents "significant logistical challenges." The affected area is remote with limited communication and poor transportation infrastructure.

Ebola, named for the Congolese river near where it was first identified in 1976, begins with a sudden fever, aching muscles, diarrhea and vomiting. It is a hemorrhagic fever, marked by spontaneous bleeding from internal organs and, in most cases, death. It can be transmitted by close contact with infected animals or people, usually through blood or other bodily fluids.

People can contract the virus through direct contact with victims' bodies at funerals. Caretakers, nurses and doctors treating Ebola patients also are at high risk.

WHO says the outbreak in Bikoro is the ninth outbreak of Ebola in the DRC since it first emerged in 1976.

Experimental Vaccine Deployed in DR Congo Ebola Outbreak
Tagged:
Copyright © 2018 Voice of America. All rights reserved. Distributed by AllAfrica Global Media (allAfrica.com). To contact the copyright holder directly for corrections — or for permission to republish or make other authorized use of this material, click here.