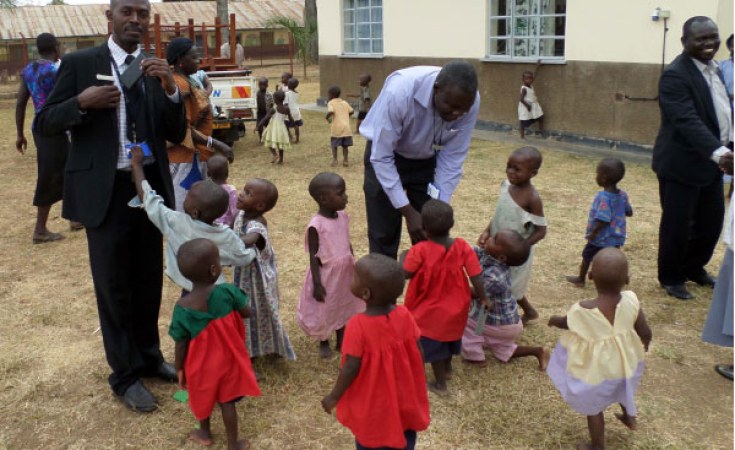 Photo: Scovin Iceta/Daily Monitor
Officials from Stanbic Bank play with some of the orphans at Moyo Babies Home recently. Right is the entrance to Sanyu Babies Home in Kampala. Government is reviewing the activities of orphanages with a view of closing them.
The Monitor (Kampala)
By Bill Oketch

Lira — The ministry of Gender, Labour and Social Development is engaging founders of orphanages countrywide with the aim of reviewing their operations.

This development follows a number of studies which suggest that child institutionalisation is associated with negative consequences for children's development and that orphanages "damage their inmates, sometimes beyond repair".

The United Nations Children's Fund, or Unicef, estimates the number of children living in orphanages in Uganda to be about 2.7 million.

Today, government is reviewing the activities of orphanages with a view of closing them, a source told this newspaper.

Mr Mondo Kyateka, the commissioner for youth and children affairs at the Gender ministry, told Daily Monitor yesterday that as the implementing body, they have already started closing down illegal orphanages.

"We are closing down homes that are illegal. Homes that do not have a certificate from the ministry are going to be closed and we have already started," he said in a telephone interview.

She says they have been holding discussions with the Gender ministry, with a view of transitioning from institutional care to home-based or community-based care system.

"But I thought we would keep these children at Smile Africa until they are old enough to live on their own. However, people from the ministry of Gender always tell me these children need to be taken back to the community, they need to grow up in the community," Ms Kahawa says. Her organisation caters for more than 400 children.

However, Ms Kahawa says she would have no problem if the plan is in the best interests of the children.

Sarah Apio, 28, who lived in an orphanage in Kole District for 12 years, says though she benefitted a lot in the institutional care, the best thing one can give to orphans is to find them families.

Hope and Homes for Children (HHC), a charity working internationally to close orphanages, says children who grow up in orphanages are 40 times more likely to have a criminal record than those who grow up with a family and 500 times more likely to commit suicide, and - the scope for abuse and neglect aside - the damage of growing up without any one-on-one love and attention can last a lifetime.

Mr Epaphrodite Nsabimana, the learning and research manager for HHC, told Daily Monitor in Nairobi that the time is now for child de-institutionalisation to happen.

"Relying on institutional care would be like someone having an umbrella inside a leaking house to protect himself from rain. Institutional care is actually unnecessary because it constitutes the erosion of positive traditional values," he says.

The certified child therapist argues that the real root causes behind the child being placed into the institutions are the ones which should be addressed rather than placing children into child institutions.

Hope and Homes for Children estimates that eight million children worldwide are growing up in institutions such as orphanages. The organisation says children raised in institutions suffer physically, intellectually and emotionally.

Ms Kahawa agrees: "Adults who were raised in children's homes and orphanages like ours [Smile Africa Ministries]; are now grown up with families but their lives are broken forever. They don't have a sense of belonging in the community."

It is believed that often conflict, poverty or a lack of support that drives parents to give up their offspring to institutions. They are often told that their children will get a better education and have a better chance in life in an orphanage, and many sign agreements that they will not try to contact their offspring again.

Eric Kubwimana was born in Rwanda in 1992. He was taken to an orphanage when he was two years old after his mother was killed during the genocide in 1994. While at the orphanage, his father, his only two sisters, five uncles together with their wives and children were also brutally killed during the ethnic clashes.

Kubwimana left the orphanage in 2014 after spending more than 20 years under institutional care. Currently working as a relationships manager in one of the local banks in Rwanda, he is still struggling to come to terms with direct experience of living in the orphanage.

"In fact, my performance in school was so poor because nobody within the orphanage could make a follow up to know whether I was progressing or not. So I was a messed up child, I was so careless and I never had a plan for my future," he told journalists in Nairobi last week.

Kubwimana was among four guest speakers who shared their experiences with journalists from Africa during the "Caring for vulnerable children in a fractured world" reporting workshop organised by Thomson Reuters Foundation.

What other countries have done

Closing. In Africa, Rwanda plans to close all its orphanages. Critics say this is unusual, as there are few services for the millions of children living in poverty. So far, 80 per cent of the children under institutional care in Rwanda have been removed and absorbed into either home-based or community-based care system.

The government of Malawi intends to close 400 orphanages and take children back to the community by the end of 2018.

Challenges. J.K Rowling, a British author and screenwriter, said there are multiple challenges in changing a system that is "so damaging to so many children," but "this is a solvable problem".

"Children need, deserve and have a right to families," she said.

The Rwandan government employs social workers to help children with the change from orphanage life. But critics say the programme has moved too fast. There have been cases of families unable to feed their returned children, and some young people from the former orphanages are alone and homeless.

"Most of the people who do reintegration programmes want to rush placing children in families without proper preparation. We need to ensure that everyone is better and well prepared," Nsabimana said.

"The children need to be familiarised with the new environment, but also helping them to overcome the effect of institutional care where it is needed. Here, special support to children with disability should be provided."

Guidelines. Article 3 of the UN Convention on the Rights of the Child requires member states (Uganda inclusive) to observe the "best interests of the child as a primary consideration in all actions concerning children, whether undertaken by public or private social welfare institutions, courts of law, administrative authorities or legislative bodies."

As with most articles of the Convention, however, a clear and precise understanding of the "best interest" concept remains elusive, to the point that it is subject to competing interpretations.

In the context of child custody cases, focusing on the child's "best interests" means all custody and visitation discussions and decisions are made with the ultimate goal of fostering and encouraging the child's happiness, security, mental health, and emotional development into young adulthood.