Zimbabwe: Citizens Hold Their Breath Ahead of July Elections 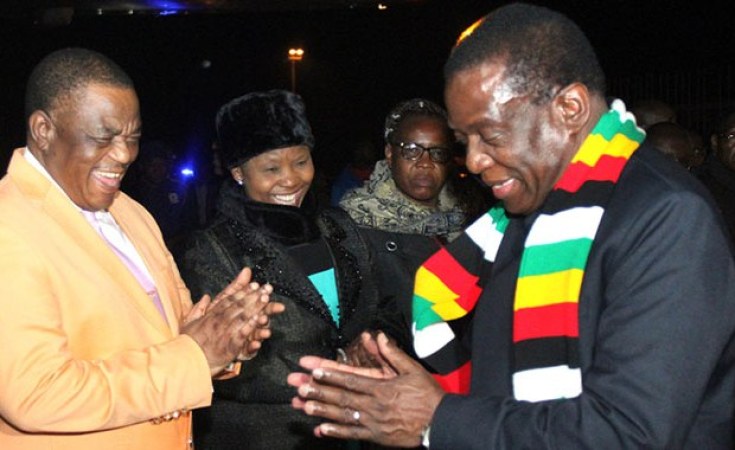 Free and fair elections were one of Zimbabwean President Emmerson Mnangagwa's central promises when he took power six months ago. But will he deliver? Voters in the capital Harare are skeptical.

With general elections provisionally set for July, there are huge expectations abroad but widespread skepticism in Zimbabwe that they will be free and fair as promised by 75-year-old President Mnangagwa. The new head of state, who took over after a coup put an end to the 37-year rule of his predecessor Robert Mugabe, is seen as too much part of the system he is supposed to reform. "Any rational person would at best give the administration and Mnangagwa the benefit of the doubt," Eldred Masunungure, a political scientist at the University of Zimbabwe, told DW.

There are also growing doubts that the promised reform of the electoral law will be in place in time. "It is clearly too late. You can't expect the law to be implemented and change the environment in two or three months. It is simply not possible," said Masunungure.

Negotiations between the government and political parties on how best to reform the electoral system are still ongoing. Among other demands, the opposition insists on an equal and fair share in media coverage, especially by public broadcasters. In the past, if the opposition's campaigns were covered at all, the reporting was mostly along negative lines. On the streets of the capital Harare there is no feeling that things have changed on this particular front: "Opposition parties are not getting enough coverage as compared to the ruling party. The ruling party is always on the screen," one citizen told DW.

To preclude vote rigging, the opposition and civil society want access to all information on the company which will print the ballots and how many there will be. The government has been stalling on this.

Another potentially contentious issue is campaign financing. All parties have received funding according to their number of representatives in parliament. That naturally means that ZANU-PF got the lion's share. But suspicions are growing that the governing party has also been receiving funding from elsewhere. They've been splurging ahead of the campaign: handing out all-terrain vehicles to their candidates in all 210 constituencies, as well as distributing caps, scarves and shirts, and putting up giant billboards with the president's portrait, like the one covering the party's 17-storey high headquarters.

Many people believe that the ruling party is using state resources and also benefitting from financing "that is probably coming from their traditional partners like China and there is a close relationship with Russia that is interested in platinum mining in Zimbabwe," said DW correspondent Priviliege Musvanhiri. To think that ZANU-PF will be transparent about financing is "wishful thinking," he added.

There is no tradition of accountability and good governance in Zimbabwe, which was ruled in an autocratic way by Robert Mugabe for almost four decades. But analyst Masunungure says it would be unfair to deny that there have been changes for the better. This applies especially to freedom of speech. The political opposition has been able to hold rallies undisturbed by police harassment or attacks by ZANU-PF supporters, which, Masunungure says, "was the standard reaction, almost a trademark, previously."

On the streets of Harare, people tend to agree. One resident told DW that, although vote buying is still going on, "personally, I have not witnessed any political violence. This year's election may be different. We are likely not going to witness open violence, killings and burning of properties."

This hope is due to President Mnangagwa, who has made an effort to reassure Zimbabweans and the rest of the world and to win his own party's candidates and supporters over to his point of view. He recently told them: "You can't force people to vote for you. We can persuade people to vote for us."

All these steps, including invitations to the European Union and the US to send election observers, have significantly changed the once toxic political environment. "Even in our qualitative studies and our public opinion surveys there is some evidence that the political environment has changed beyond recognition," political analyst Masunungure said.

But the history of the country - which he calls "a nasty one" - will not allow him to be unreservedly optimistic. Like most of his countrymen, Masunungure is on his guard, waiting to see what will happen after the elections: "Yes, we are skeptical, but at the same time I would call it a healthy skepticism: so far, so good," he summed up.