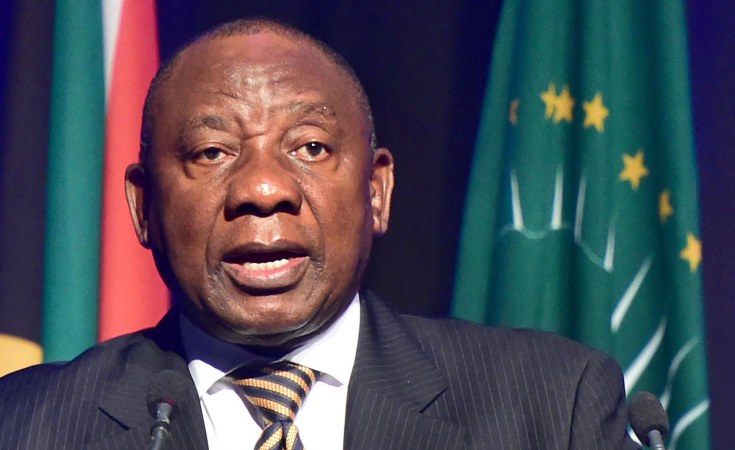 South Africa's foreign policy will always be rooted on the African continent, seeking to contribute towards Africa's renaissance. In this regard, we draw inspiration from Pixley ka Isaka Seme [who became one of the founding leaders of the African National Congress], whose seminal lecture at  Columbia University in 1906, "The regeneration of Africa," conceptualised the African Renaissance. Today, and in the future, South Africa continues to be guided by this view of the rebirth of the continent and its great potential.

The African Agenda, which has been the hallmark of our foreign policy on the continent, is the programme through which we are seeking to realise this renaissance, predicated on Pan-African solidarity and cooperation.

As we have done since our liberation, we are determined to redouble our efforts in contributing to peace and security, development and prosperity for Africa. We do as part of expressing our gratitude to the peoples of Africa for the unwavering solidarity and comradely hospitality which made it possible for us to wage a triumphant struggle against the colonialism of a special kind that was apartheid.

We are irrevocably committed to the realisation of the goals of [the African Union's] Agenda 2063, Africa's blueprint and vision for an integrated, prosperous and peaceful continent, "the Africa We Want".

Pursuant to this objective we recognise the adoption just two months ago of the African Continental Free Trade Area (AfCFTA) as an iconic milestone along our journey towards an eventual African Common Market as envisioned in the 1991 Abuja Treaty establishing the African Economic Community. This continental free trade area is a critical response to Africa's developmental challenges. It will enable Africa to significantly boost intra-Africa trade, improve economies of scale and to establish an integrated market. It will also be a catalyst for industrial development, placing Africa on a path to exporting value-added products, improving Africa's competitiveness both in its own markets and globally. Leveraging on a population of over 1 billion people, the African Continental Free Trade Area (AfCFTA) will create a market of approximately U.S. $2.6 trillion, thereby addressing Africa's key development challenges such as unemployment and poverty reduction.

Today, we can safely say that the experience and spectre of conflict in Africa has declined dramatically, and most Africans are more secure than ever. The peace dividend experienced by a number of countries previously stricken by conflict – such as Côte d'Ivoire and Rwanda – has translated into unprecedented levels of economic growth for these countries. Côte d'Ivoire together with Ghana, Ethiopia, Djibouti, Senegal and Tanzania are now part of the 10 fastest-growing economies.

We, however remain deeply concerned by the ongoing insecurity in the east of the Democratic Republic of Congo, in the Sahel region... in Libya, Somalia, and the ongoing conflict in South Sudan. We are hopeful that concerted efforts by the African Union and its subsidiary organisations, in cooperation with the United Nations, will lead to peaceful and durable solutions to these conflicts. These and other efforts should contribute towards the attainment of one of the goals of Agenda 2063, namely, "Silencing the Guns" by 2020.

By the end of this year, 20 countries in Africa would have held presidential and parliamentary elections. This impressive number of countries choosing "the ballot instead of the bullet" to determine its leaders is a clear indication of political progress, and the deepening of democracy on the continent. We wish all the fraternal countries that will be holding elections this year, a peaceful, free and fair ballot that represents the will of the people.

As you are aware, the African Union's theme for 2018 is: "Winning the fight against corruption - a sustainable path to Africa's Transformation". The selection of the anti-corruption theme is pertinent as it raises one of the most pervasive scourges impacting on good governance and stunting economic development in Africa. In fact corruption undermines the very fibre of the "Africa We Want" as envisioned in the AU's Agenda 2063. We are inspired by those countries that are taking bold measures in dealing with this negative phenomenon, and would encourage those that have not done so to tackle this scourge which is deferring the realisation of the African dream.

South Africa welcomes the institutional reforms of the African Union spearheaded by my dear brother, HE President Paul Kagame [of Rwanda]. We believe these reforms should lead to a more agile, responsive and modern organisation that is fit for purpose. In this regard it is important that the AU institutions are properly aligned; that there is better and efficient management at both the political and operational levels, and that the organisation is sustainably self-financing.

We are encouraged by the discussions that took place early this week in Buenos Aires during the G20 Foreign Ministers Meeting, which reaffirmed the centrality of the multilateral system, with the UN at its apex. At the same time the meeting underscored the key role and stake the G20 has in supporting a rules-based, open and fair multilateral trading system, anchored in the World Trade Organisation. I believe that this meeting has set the correct framework for a productive and successful G20 Leaders meeting in November this year.

South Africa will assume the Presidency of the BRICS formation when it hosts the 10th BRICS Summit, in Sandton, Johannesburg, from 25 to 27 July 2018. South Africa will continue to champion the interests of Africa within the BRICS formation and will, in this regard convene an outreach session with African leaders. We believe this session will provide a platform for discussing ways and means of deepening cooperation with BRICS countries including providing support for continental industrialization and infrastructure development programmes.

South Africa will be relinquishing the African co-chair position at the 3rd Forum on China Africa Cooperation (FOCAC) Summit that will be hosted in Beijing, China in September. We were extremely privileged to have been part of efforts to elevate this partnership to a new strategic level as well as the Chinese commitment of providing U.S. $60 billion for Africa's socio-economic development. South Africa will continue to support the incoming African co-chair in ensuring that the continent continues to derive the maximum potential from the partnership.

We are humbled by the endorsement we received from the AU to serve in the UN Security Council for the period 2019 to 2020. We aim to use this opportunity to promote peace and security in the world, and more specifically in Africa where most of the world's conflicts are located. As in its previous two terms on the Security Council, South Africa will place emphasis on African Union-United Nations cooperation. As we approach the June 8 elections at the General Assembly we would like to take this opportunity to solicit your support for our candidature.

This year marks the centenary of the birth of the founding father of our democracy, President Nelson Rolihlahla Mandela. As we celebrate his centenary, we remember Nelson Mandela as the struggle stalwart, freedom fighter and first democratic President of South Africa, whose commitment to justice, equality and non-racial South Africa was unwavering. More generally we should continue to honour the life and legacy of our continental leaders including Nelson Mandela. During this centenary year, we pay tribute to one of Africa's greatest sons who left an indelible mark on our society, and provided an example for Africa in its pursuit for a prosperous, just, and peaceful continent.

I close in the words of Kwame Nkrumah, who said: "The forces that unite us are intrinsic and greater than the superimposed influences that keep us apart."

Previous Story
Next Story
Africa - Not Yet Uhuru

Africa - Not Yet Uhuru