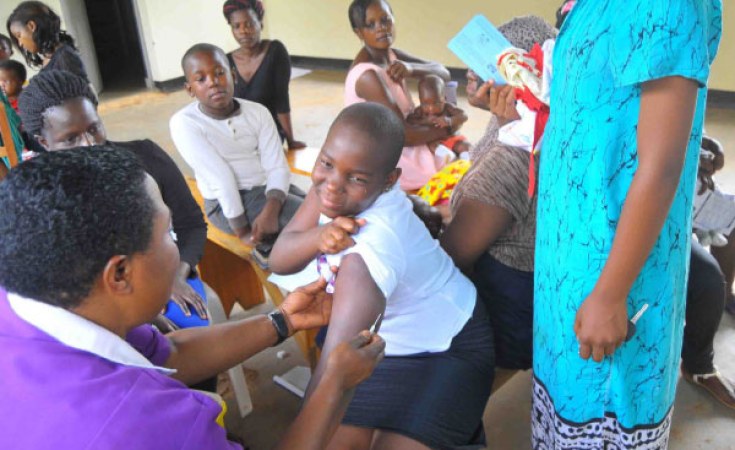 Kampala — Women and girls in Uganda have continued to shun the Human Papilloma Vaccine (HPV) meant to protect them against cervical cancer, a new study has shown.

The study conducted between January and February 2018 by a consortium of Uganda cancer organisations led by the Uganda Women's Cancer Support Organisation (UWOCASO), shows that only 41 per cents of the girls aged 10 years had received the second dose of the vaccine compared to 88 per cent who received the first dose.

Ever since the launch of the HPV vaccination campaign by government in 2015, the study further indicates a drop-out rate of 42 per cent in terms of the girls who completed their immunisation dose.

The study attributes the low uptake of the vaccination to poor planning and coordination among different stakeholders, poor social mobilisation and insufficient communication.

"By end of 2017, the HPV 1 coverage was 88 per cent and HPV 2 was at 41 per cent resulting in a drop-out rate, according to clinical records from government facilities," the study adds.

Some of the respondents said they were afraid that the vaccine was being used as a contraceptive and others thought it would lead to infertility.

UWOCASO chairperson, Ms Rebecca K. Mayengo, said there is a need for more parent involvement to increase uptake of HPV vaccination for girls.

"We also need to analyse whether the women are understanding the information on cervical cancer if we were to increase uptake of screening and vaccination," Ms Mayengo said, adding that a campaign dubbed as "All of me. HPV cancer Free Initiative" has been launched to increase uptake.

The study titled: "Literature Review on Knowledge attitude and practices concerning cervical cancer and human papillomavirus vaccination in Uganda, indicates that HPV remains the number one cause of cervical cancer and is the commonest sexually transmitted infection.

According to Dr Immaculate Ampeire of the Uganda National Expanded Programme on Immunisation, failure by the girls to take two doses of the vaccine exposes them to develop cervical cancer in future.

She said the immunisation jabs should be between six months apart but there is always a window of 12 months if you miss taking the vaccine at six months.

Dr Gerald Mutungi, the programme manager for non-communicable diseases at the Health ministry asked parents and their daughters to embrace the vaccination campaign to avert having cervical cancer in the future.

As a way of increasing uptake of screening services, Dr Noleb Mugisha of the Uganda Cancer Institute said there is a plan to have a reference physician for cancer at every regional referral hospital to ensure early diagnosis.

Currently, more than 80 per cent of women diagnosed with cervical cancer in Uganda present at the health facility with the cancer in its advanced stages.

Over 5000 Girls Vaccinated for Cervical Cancer

First Lady Praises Rwanda's New Cervical Cancer Prevention Plan
Tagged:
Copyright © 2018 The Monitor. All rights reserved. Distributed by AllAfrica Global Media (allAfrica.com). To contact the copyright holder directly for corrections — or for permission to republish or make other authorized use of this material, click here.