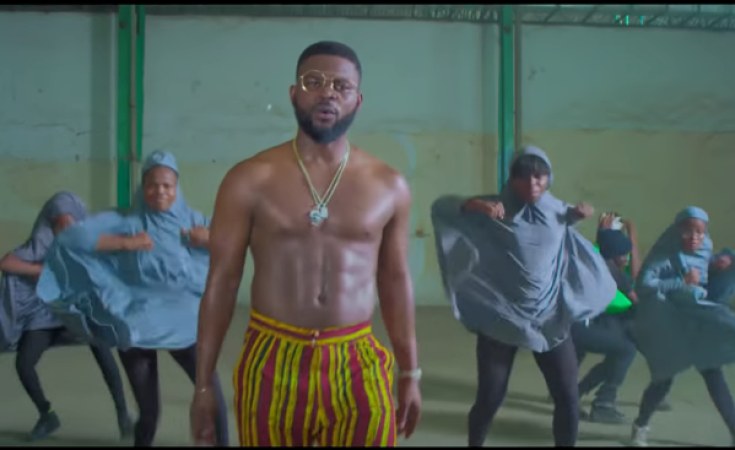 The Muslims Rights Concern, MURIC, Tuesday, faulted popular music act, Folarin Falana better known as Falz, over the negative portrayal of the Fulani tribe and Hijab-wearing women in his trending video, 'This is Nigeria', warning that such depictions were capable of causing religious crisis of unprecedented dimension.

Falz, who is an offspring of human rights lawyer and Senior Advocate of Nigeria, Femi Falana, in the controversial music video, featured a character that dressed like a Fulani man, who suddenly abandoned his traditional guitar and beheaded a man. It also portrayed women in hijab as choreographers doing the 'shaku-shaku' dance moves which had been linked with a drug-related song

MURIC, however, in a statement by its Executive Director, Prof Ishaq Akintola, said the music video was nothing but a hate-induced production; demanding both its withdrawal and an apology to Nigerian Muslims within seven days.

It also threatened legal action, if the demands are not met.

The statement reads: "The Muslim Rights Concern (MURIC) strongly denounces the 'Shaku Shaku' dance video by Folarin Falana (Falz the Bahd Guy). It is thoughtless, insensitive and highly provocative. It is a hate video. It is Islamophobia nulli secundus.

"This video has the potential of causing religious crisis of unprecedented dimension. We therefore demand its withdrawal and an apology to Nigerian Muslims within seven days or the authors and their agents will face legal action if they fail to comply.

"The video manifests ethnic bias against Fulanis while it ignored the criminal activities of ethnic militia of the Middle Belt who have also massacred Fulanis and rustled their cattle in their thousands. This video has denigrated Islam, demonized Nigerian Muslims and subjected them to public opprobrium.

"MURIC rejects Falz' explanation that the girls in hijab in his 'Shaku Shaku' dance symbolize the Chibok girls because nothing in the video indicates that the girls represent the Chibok girls. At least none of the Chibok girls have been seen dancing like a drunkard. They are always in pensive mood. Do they have any cause to be dancing? Are they happy? This video is the most detestable, odious and insidious Islam-bashing in recent time.

"Only the scenes portraying police brutality and the money-swallowing snake in the video are near the truth. Falz' 'Shaku Shaku' video is nothing but a hate-induced production. It is a most unpatriotic handiwork of a Nigerian youth in 2018.

"We call the attention of security agencies to this hate action. The tragedy facing modern societies all over the world is their criminal complicity in Islam-bashing and their hypocritical accusation of Muslims of terrorism and religious violence.

"We remind Nigerians of the outcome of similar provocative actions in the past and their unpalatable outcomes.

"We condemn violence and all acts of terrorism. But we do not share the opinion that freedom of expression can go to any length.

"As we round up, MURIC warns Nigerian artists to stop giving Muslim names to devilish and lowly characters. We appeal to Muslims all over the country to simmer down. Let us adopt a civilized approach to 'Shaku Shaku' and teach agents Provocateur some lessons in respect for human feelings. Instead of going violent, Nigerian Muslims should take those behind the 'Shaku Shaku' video to court in order to serve as a deterrent to others.

"We therefore give notice of impending legal action against the artist behind the 'Shaku Shaku' video unless the latter is withdrawn and an apology is widely published within seven days."

NFVCB Reacts to Falz's 'This Is Nigeria' Video

Is Falz's "This Is Nigeria" a Call On Govt to Act?

Muslim Group Angry Over 'This is Nigeria' Video

This Is Nigeria - Muslim Group Withdraws Threat Against Falz
Tagged:
Copyright © 2018 Vanguard. All rights reserved. Distributed by AllAfrica Global Media (allAfrica.com). To contact the copyright holder directly for corrections — or for permission to republish or make other authorized use of this material, click here.