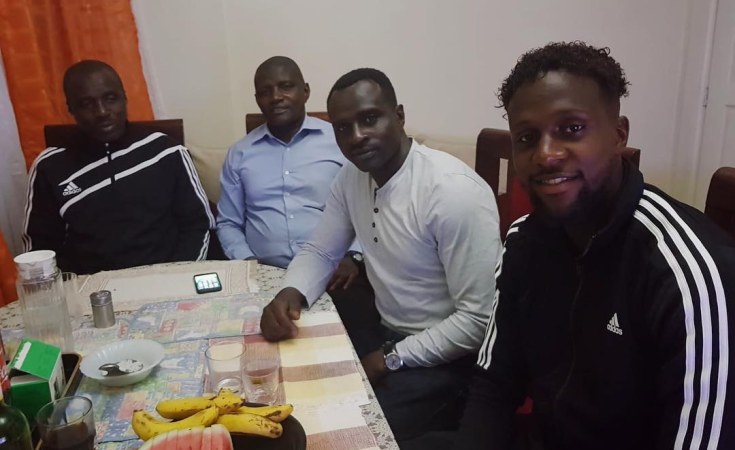 News of Belgian striker with Kenyan roots Divock Origi's visit to Kenya has been received with excitement from thousands of his fans on social media.

The 23-year-old, who is on holiday following a grueling season in Germany, made the announcement on his Instagram account on Wednesday.

The post was accompanied with a picture of himself in in the company of his dad Mike Okoth and two uncles, one of them being former Harambee Stars skipper Austin Oduor.

His dad Mike, is also a former Kenya international who spent the better part of his professional career in Belgium where Divock was born.

Austin, on the other hand featured and captained Gor Mahia's all conquering squad of 1987 that won the defunct Africa Cup Winners Cup (Mandela Cup).

He is also the father of former Kenya international goalkeeper Arnold Origi, who is based in Norway.

Came back to my roots 🇰🇪 Learning from 3 kings ♛♛♛ Issa family affair #Dad #Uncles - A post shared by Divock Origi (@divockorigi) on Jun 6, 2018 at 9:15am PDT

Divock was raised and received his early football education in Belgium, representing the European nation at all junior levels up until he was selected and featured at the 2014 Fifa World Cup in Brazil.

He started his senior professional career 2012 with French club Lille before moving to Liverpool in 2014 after his World Cup debut.

In August 2017 he was loaned to German side Wolfburg after falling behind Mohamed Salah and Sadio Mane in the Reds' pecking order.

After a good start at Wolfsburg, Divock struggled to find the back of the net, scoring six times in 31 matches.

Origi is now set to return to England at the end of his loan spell in Germany ahead of the 2018/2019 league season.

In the meantime, he will probably relish the opportunity to visit tourist sites as well as catching up with friends and relatives in his father's homeland.