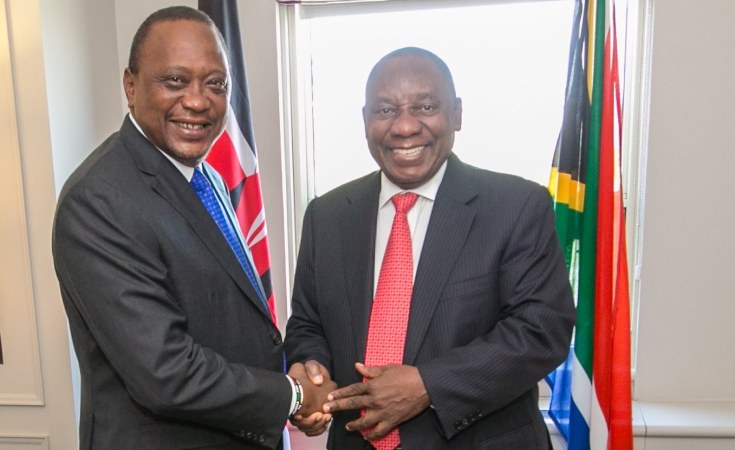 President Kenyatta and President Ramaphosa agreed to hold an investment conference in Nairobi in the last quarter of the year, that will focus on promoting intra-Africa investment and specifically investment into South Africa and into Kenya.

At the meeting in Quebec City in Canada on Sunday, the two leaders resolved to strengthen bilateral relations including to work on immigration where progress has been made.

They also agreed that President Kenyatta will make a State Visit to South Africa as soon as possible at a date to be advised through the usual diplomatic channels.

The President was accompanied by Foreign Affairs Cabinet Secretary Dr Monica Juma and Deputy Chief of Staff for Strategy and Policy, Ruth Kagia.

President Kenyatta pitched for the Bank's emergency fund to help in the repair of Nairobi roads damaged by rains.

President Kenyatta Kenyatta and the World Bank CEO also discussed the realigning of the Bank's funding to reflect the 'Big Four Agenda'.

At the talks with President Sall, it was agreed that Kenya will open its first embassy in Francophone countries in Dakar, Senegal, within four months.

President Kenyatta said that the opening of the embassy in Dakar will be a big step in raising the level of engagement with that part of the world.

"The AfCFTA we agreed in Kigali has to be supported by bilateral actions. And so we are reaching out to Senegal to expand our trade frontiers and boost people-to-people relations necessary for trade," the President said.

President Sall invited President Kenyatta to visit Dakar in January as keynote speaker at a major conference and to continue to solidify ties.

At the meeting with Prime Minister Holness of Jamaica, the leaders agreed to get tangible bilateral relations moving between their two countries.

They discussed a wide range of areas of cooperation including exploring quick wins like code share for airlines with Kenya Airways due to start non-stop flights from Nairobi to New York in October. Connection to Kingston, Jamaica, is 3 hours from New York.

Exchange of athletics coaches also featured at the talks between President Kenyatta and Prime Minister Holness. Jamaican athletes are top in short races while Kenya is top in long-distance running.

On boosting trade between the two countries, President Kenyatta and Prime Minister Holness agreed that Kenya could export its tea and coffee to Jamaica and in turn import their peanuts.

President Kenyatta also pledged commitment to work with Jamaica in ensuring the African, Caribbean and Pacific Group of States (ACP) speak with one voice and is not splintered along continent lines.

"We must strive to speak in one voice. We are weaker when splintered," President Kenyatta said.

The leaders also discussed culture and entertainment as a bedrock for promoting tourism in the two countries. 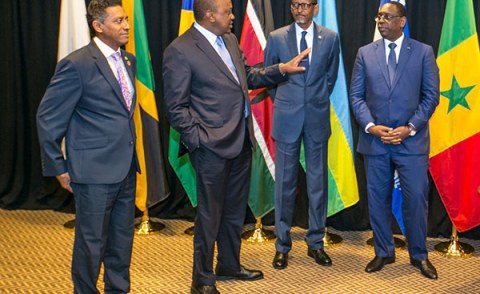 Presidents Put Africa on the Agenda at G7 Summit 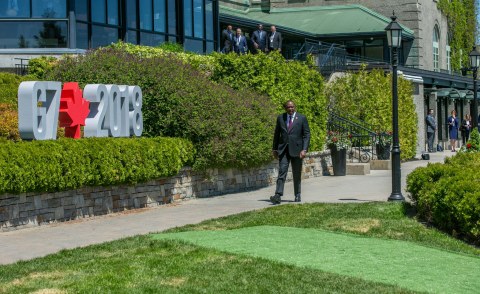 Kenya to Open Embassy in Senegal, Strengthen Ties With Jamaica
Tagged:
Copyright © 2018 Kenya Presidency. All rights reserved. Distributed by AllAfrica Global Media (allAfrica.com). To contact the copyright holder directly for corrections — or for permission to republish or make other authorized use of this material, click here.