South Africa: ANC Statement On the Third Election of the South African Government As a Non-Permanent Member of the United Nations Security Council

The African National Congress welcomes the third election of South Africa as a non-permanent member of the UN Security Council. This is a victory for peace and an opportunity to address the root causes of conflict. This further ensures that inequality and underdevelopment are addressed as well as allow for the promotion of inclusive political dialogue.

The ANC appreciates and acknowledges the role played by the 183 of the 190 states who voted for South Africa. The ANC-led government will utilise its membership to advance interests of Africa, particularly, the priorities of the African Union Agenda 2063.

The ANC 54th National Conference declared 2018 as the centenary year of Nelson Rolihlahla Mandela and Mama Albertina Sisulu, both of whom were champions of peace, progress and democratic resolution of challenges. The election of the SA government under the leadership of the ANC in the UNSC, heralds an opportunity for a peaceful resolution of the issues concerning the global community, especially the violence meted on the Palestinians as well as the continued occupation of Western Sahara.

The ANC calls on the world to follow on the footsteps of Nelson Mandela and Mama Albertina Sisulu and reflect on the current world order, the balance of forces within the individual countries, regionally, continentally and globally. This reflection should be underpinned by the role such forces play in shaping the agenda that protects the ideals of a world that is just, equitable, peaceful, and prosperous.

The ANC and the government it leads will fulfill its historic mandate of building a world of peaceful co- existence, tolerance to diversity, respect of the rule of law and the sovereignty of states.

We remain deeply concerned about the emergence of unilateralism and its attendant threat to an International rules-based system. The ANC reaffirms South Africa's commitment to enhance cooperation between the United Nations and all other multilateral organisations in matters relating to the maintenance of international peace and security in accordance with the United Nations Charter and International Law. 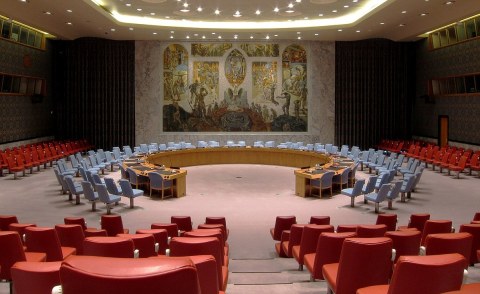 UN Security Council Seat a Win for African Interests, ANC Says
Tagged:
Copyright © 2018 African National Congress. All rights reserved. Distributed by AllAfrica Global Media (allAfrica.com). To contact the copyright holder directly for corrections — or for permission to republish or make other authorized use of this material, click here.