South Africa: Six Years Later, Cops Are in Court but Justice Is Elusive 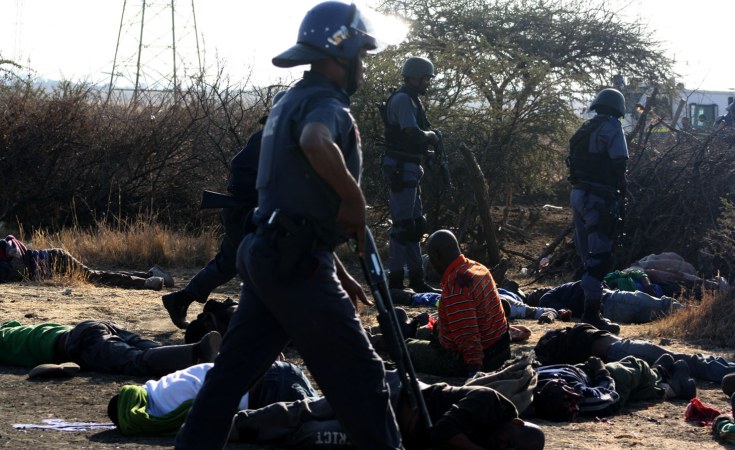 Photo: SAPA
Police on the scene at Lonmin platinum mine in Marikana in' the North West where ongoing violence resulted in the shooting of a number of people on Thursday, August 16, 2012.
Daily Maverick (Johannesburg)
analysis By Greg Nicolson

Almost six years after the Marikana massacre, police officers are finally in court, meaning families might finally find justice. But don't get your hopes up yet. The cops in the dock are only accused of a fraction of the murders and real accountability and redress remains elusive.

On the morning of 13 August 2012, Lonmin production team leader Julius Langa's body was found near the Marikana railway with 18 incisions on his chest, back and upper limbs. He left his wife to go to work earlier that morning before he was probably murdered by striking mineworkers.

If the police didn't later fire tear gas, Langa might have been the only person to have been killed in Marikana that Monday.

Lonmin miners demanding a pay increase had been on strike for days and had already clashed with National Union of Mineworkers (NUM) officials and killed security guards and non-striking employees.

On 13 August they marched to the Karee shaft to see if anyone was working. Security said the area was empty and they headed back towards the koppie, a...

Previous Story
Next Story
Will There Ever Be Accountability for the Marikana Massacre?

Will There Ever Be Accountability for the Marikana Massacre?

All Talk, Yet No Action Taken on South Africa's Marikana Massacre

'No Justice' for South African Miners Seven Years After Massacre
Tagged:
Copyright © 2018 Daily Maverick. All rights reserved. Distributed by AllAfrica Global Media (allAfrica.com). To contact the copyright holder directly for corrections — or for permission to republish or make other authorized use of this material, click here.