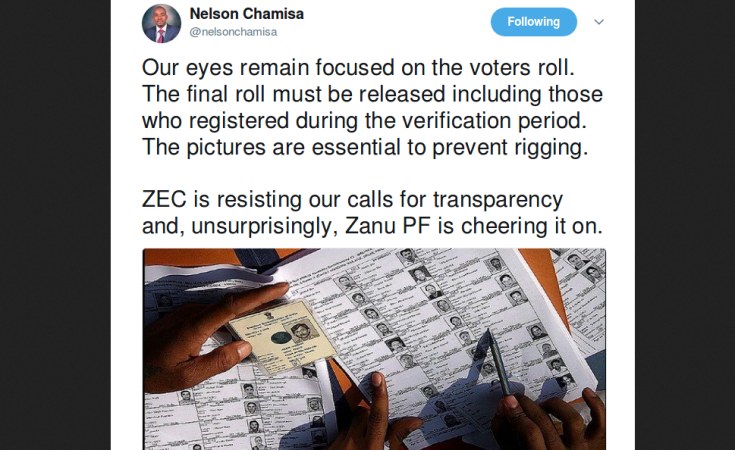 MDC Alliance on Tuesday said it had received a copy of the voters' roll for the July 30 harmonised elections, but immediately demanded photographs of all registered voters to conduct an audit through door-to-door visits. In a bid to cast aspersions on the Zimbabwe Electoral Commission (ZEC) and undermine the credibility of the polls, MDC-T faction leader Mr Nelson Chamisa, who leads a coalition of seven fringe political parties, insisted the voters' roll was not final.

Photographs, ZEC commissioner Dr Qhubani Moyo said, would be used by the electoral body on election day for identification purposes.

"The voters' roll that we compiled does contain photographs of everyone registered," he said.

"We are going to use those photographs for identification purposes as the commission during voting day. All stakeholders interested in the voters' roll have been given a voters' roll that carries adequate information of the voter in terms of their name, age, ID number and also where they are registered.

Can you imagine what it entails to download a file that has images of 5,6 million Zimbabweans for everyone who wants to go through it? We are convinced as a commission that all stakeholders desirous of the voters' roll do have adequate information."

Dr Moyo added: "There has been a number of issues being raised by a lot of people saying when we were registering you made a commitment that our details are going to be purely for election purposes and for us now to be giving every stakeholder those pictures creates problems of confidence amongst citizens who would not have registered had they known their pictures would be given to anyone."

Mr Chamisa, who is under fire from alliance partners after he grabbed parliamentary and council seats reserved for them, said the voters' roll was not final.

"We've now established that the voters' roll ZEC is issuing is not the final roll," he tweet- ed.

"Those who 'registered' during inspection are yet to be added. ZEC claims it will add them later. So ZEC has given us a voters' roll it knows is not final. Our response is coming, it will be red."

Observers yesterday said the frivolous demands being given by the Chamisa-led coalition showed the party was running scared ahead of the elections.

Senior legal counsel Mr Tendai Toto said: "These are methods and tactics of the rightwing brothers and sisters to scuttle the impending elections.

"The demands interfere with voters' rights to free choice. The exercise of voters' roll audit can be used by anybody to intimidate the electorate, campaign for or against, and unnecessarily interfere with people's privacy.

"How will political parties execute the voters' roll audit if they interfere with voters' rights as forestated? It is unfortunate that some of these demands are made without due regard to citizens' rights.

"Before and after the polls it is possible that harassment, bullying, victimisation and compulsive voting can happen especially when image identities are disclosed and publicised.

"If any political parties or interested parties, stakeholders wish to conduct voters' roll audit (if they have any such mandate) they must consult the database of their respective registered supporters and conduct the audits."

Political analyst Mr Tafadzwa Mugwadi weighed in: "They are now resorting to desperate spanner-throwing shenanigans to discredit a credible electoral process, which even their member, Eddie Cross, lauded as the best since colonisation.

"Chamisa and crew have been on the forefront demanding a voters' roll from ZEC and now that that they have it, they are cornered and are running out of a political message."

Mr Cross this week said this year's elections would be the best in 54 years.

Elections Chief Chigumba in Violation of Oath of Office - Opposition

U.S. Pulls Plug on Zimbabwe's Pro-Opposition NGOs
Tagged:
Copyright © 2018 The Herald. All rights reserved. Distributed by AllAfrica Global Media (allAfrica.com). To contact the copyright holder directly for corrections — or for permission to republish or make other authorized use of this material, click here.