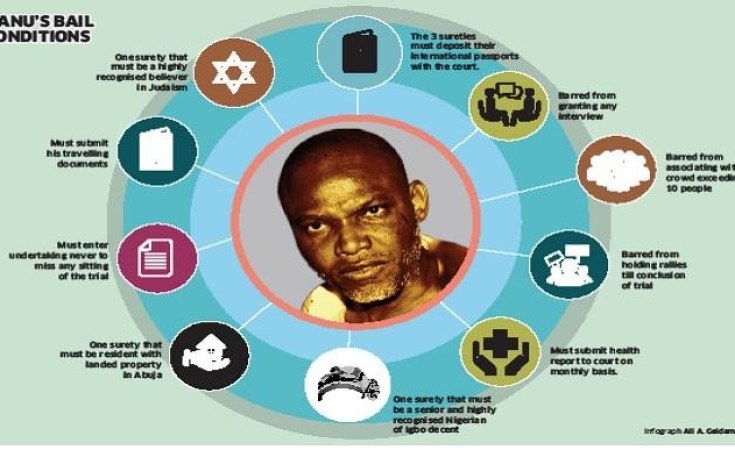 Trial Justice Binta Nyako granted the defendants bail to the tune of N10million each with two sureties in like sum.

Justice Nyako directed that the money should be deposited in cash to the Chief Registrar of the Court, even as she ordered the defendants to surrender all their travelling documents and not travel without leave of the court.

Aside asking all the surties to swear an affidavit of means, the court barred all the defendants from attending any form of rally, press conference or granting interviews.

Justice Nyako who had earlier denied the defendants bail, said she reviewed her previous ruling, the nature of the charge as well as the prescribed punishment for offence the defendants allegedly committed.

Observing that the offence attracts a maximum of seven years upon conviction, the trial Justice noted that the defendants have already spent better part of the years in prison custody.

Besides, Justice Nyako said she took into cognizance, various affidavits that urged the court to release the defendants on health ground, likewise a high court ruling that previously gave bail to the 1st defendant, Chimezie.

Neverthless, the court held that the 1st defendant must report to the Commissioner of Police in Rivers State every two weeks.

"Go home and attend to your health", Justice Nyako joking told the defendants who could not contain their joy.

The case was subsequently adjourned till November 14 for trial.

The quartet are answering to a three-count amended charge bordering on treasonable felony.

It will be recalled that trial Justice Binta Nyako had on February 20, okayed separate trial for the four defendants, following the inability of both the prosecution and the defence lawyers to produce the IPOB leader whose whereabouts has remained unknown since September last year.

The court had on the day it granted bail to the embattled IPOB leader, Kanu, held that the defendants should remain at Kuje prison owing to "seriousness" of charges against them.

In the charge marked FHC/ABJ/CR/383/2015, FG, alleged that the four defendants, alongside Kanu (now at large) and others at large, "on diverse dates in 2014 and 2015 in Nigeria and London, United Kingdom, did conspire amongst yourselves to broadcast on Radio Biafra monitored in Enugu and other areas within the jurisdiction of this honourable court, preparations being made by you and others at large, for states in the South-East and South-South zones and other communities in Kogi and Benue States to secede from the Federal Republic of Nigeria with a view to constituting same into a Republic of Biafra and you thereby committed an offence punishable under section 516 of the Criminal Code Act, Cap C77, Laws of the Federation of Nigeria, 2004".

In count-two of the charge dated March 16, FG alleged that Chimezie and Kanu had between the months of March and April, 2015, imported into Nigeria and kept in Ubuluisiuzor in Ihiala Local Government Area of Anambra State, a Radio transmitter known as TRAM 50L, which they concealed in a container that was declared as used household items, contrary to section 47(2) (a) of the Criminal Code Act, Cap C77, Laws of the Federation of Nigeria, 2004.

FG alleged in count-three that Madubugwu had sometimes in the month of October 2015, had in his possession at his house in Ubuluisiuzor in Ihiala LGA of Anambra State, one Emerald Magnum Pump Action Gun with Serial Number TS 870-113-0046 and one Delta Magnum Pump Action Gun with Serial Number 501, as well as forty-one cartridges/ammunition without lawful authority or licence and thereby committed an offence contrary to section 27(b) (i) of the Firearms Act, Cap. F28, Laws of the Federation of Nigeria.

Previous Story
Tagged:
Copyright © 2018 Vanguard. All rights reserved. Distributed by AllAfrica Global Media (allAfrica.com). To contact the copyright holder directly for corrections — or for permission to republish or make other authorized use of this material, click here.