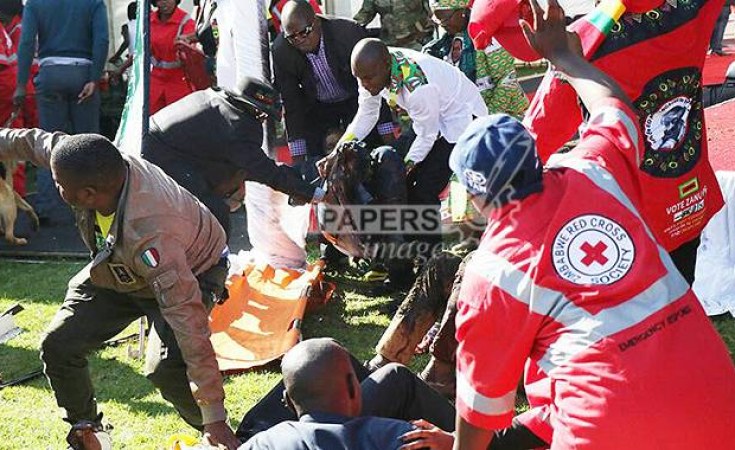 The Herald
First aiders attend to the injured following an explosion that rocked White City Stadium where President Emmerson Mnangagwa was addressing thousands of Zanu-PF supporters on Saturday.
The Herald (Harare)
By Herald Reporters

At least two people have been confirmed dead following Saturday's explosion at President Mnangagwa's White City Stadium campaign rally in Bulawayo which left 47 others injured. Of the two, one died at Mpilo Central Hospital on Sunday night, while the second one succumbed to his injuries yesterday afternoon.

Health and Child Care Minister Dr David Parirenyatwa confirmed the deaths in an interview with The Herald.

He said the names of the victims were still being withheld until their next of kin have been informed.

Dr Parirenyatwa said one other victim -- who sustained serious injuries -- was still being attended to at Mpilo Central Hospital by specialist medical doctors.

"Pursuant to what we said at the weekend that we had 16 victims that were admitted at Mpilo Central Hospital and that three of them were critical, of the three, one had exposed bowels and right leg blown off. We lost him last (Sunday) evening around 9pm. Today (yesterday) around 12 noon we lost another one with abdominal penetration injuries," said Dr Parirenyatwa.

"We have a third one who is still critical and in the Intensive Care Unit. He sustained head injuries and is being attended to by neurosurgeons. They are trying their best to attend to him and we remain optimistic that he will recover."

In a statement yesterday, police chief spokesperson Senior Assistant Commissioner Charity Charamba appealed for anyone with information that might lead to the apprehension of the crminals to alert the police.

"The Zimbabwe Republic Police wishes to inform the nation that investigations into the White City Stadium bombing incident still continue. However it is with great sadness and grief two people succumbed to injuries sustained during the bombing. May their souls rest in eternal peace. The ZRP also extends sincere condolences to the bereaved families.

"We continue to appeal for more information from members of the public in order to aid us in our investigations. On the same note we want to thank those patriotic Zimbabweans who have so far provided valuable information," she said.

Police are offering a substantial reward to anyone with information that may help in bringing the perpetrators to book.

The blast occurred just as President Mnangagwa was leaving the podium after addressing a bumper Zanu-PF rally.

The President was unhurt in the incident.

The attack drew widespread condemnation from across the world.

Previous Story
Next Story
Will Bomb Blast Start Trend of Violence Ahead of Polls?

Will Bomb Blast Start Trend of Violence Ahead of Polls? 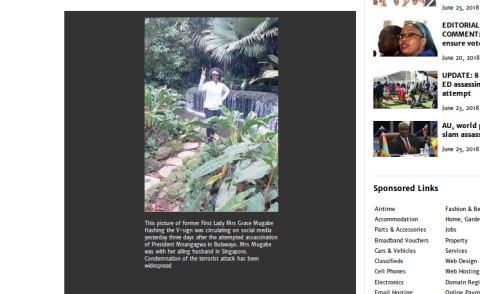 Zimbabwe State Media Link Grace Mugabe Picture to Bulawayo Blast
Tagged:
Copyright © 2018 The Herald. All rights reserved. Distributed by AllAfrica Global Media (allAfrica.com). To contact the copyright holder directly for corrections — or for permission to republish or make other authorized use of this material, click here.