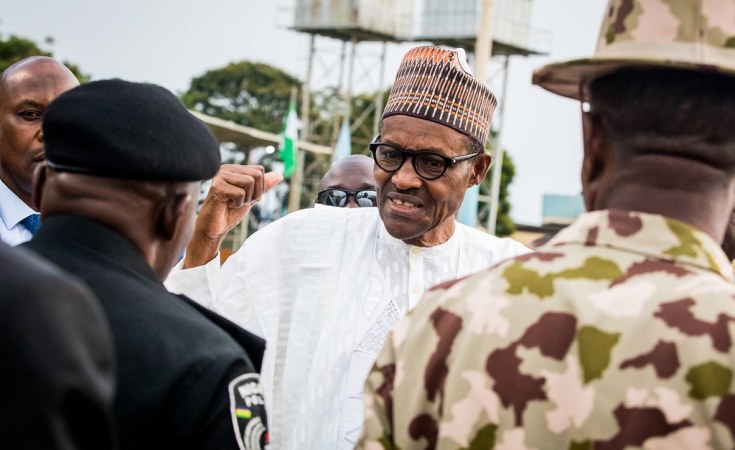 President Muhammadu Buhari has said he has the capacity to surmount the insecurity challenges bedeviling Nigeria because he knew of the challenges before vying for the office of President.

Mr. Buhari stated this on Tuesday evening at the government house, while paying condolences to victims of the recent mayhem in Barkinladi, Riyom, and some part of Jos South, which has claimed several lives.

"I contested for this position (presidency) four times before I got it, so I can not complain of the challenges we are facing," Mr Buhari said.

"Nobody can say that we haven't done well in terms of security, we have done our best, but the way this situation is now, we can only pray," the president said.

He charged leaders to be steadfast. "Leaders at all level must have control over there people in their respective constituencies," he said.

Meanwhile, Plateau State governor, Simon Lalong, also claimed that the recent killings was the handiwork of saboteurs, bent on destabilising the state.

"Agents of destabilization are however hell-bent on making nonsense of the success you have achieved in dealing with internal security threats to our corporate existence as a nation," he said.

"Our state is a beneficiary of the several measures put in place; on your instruction, the Nigeria Police has established a new Mobile Police Squadron in the Southern Zone of the state, and the Nigeria Air Force has also established a Rescue Search and Combat Command at Kerang in the Central Senatorial District of Plateau State, all in bid to activate crises response time of the Security," he told the president.

The governor said that some persons were already giving the Barkinladi unrest a religious undertone.

"What is also totally condemnable in these attacks on communities, Mr President, is the burning of places of worship to give it a religious colouration," he said.

Mr Lalong said his government will not relent in its mandate of securing citizens.

"We are determined not to allow conflict merchants to sustain these conflicts through the introduction of religious sentiments into it. Already political opportunists are seeking to draw capital out of it and regrettably, even while the deceased are yet to be committed to mother earth and the grieves of the victims still fresh," he said.

The governor suggested that the attackers might be foreigners.

"We are concerned as a state that sophisticated weapons used in these attacks, from the evidences on ground and the narrations of victims, are not those conventional to our environment for self defense but reflective of a terrorist invasion," Mr Lalong revealed.

Mr Lalong reiterated that the insecurity has brought illegal and other unwanted acts among citizens of the state, indulging in businesses that are unwarranted.

"These reoccurring attacks have regrettably opened up space for all manner of criminality by criminal elements and conflict merchants who engage daily in cattle rustling, theft, banditry, gun running and other forms of crimes amongst our citizens," the governor said.