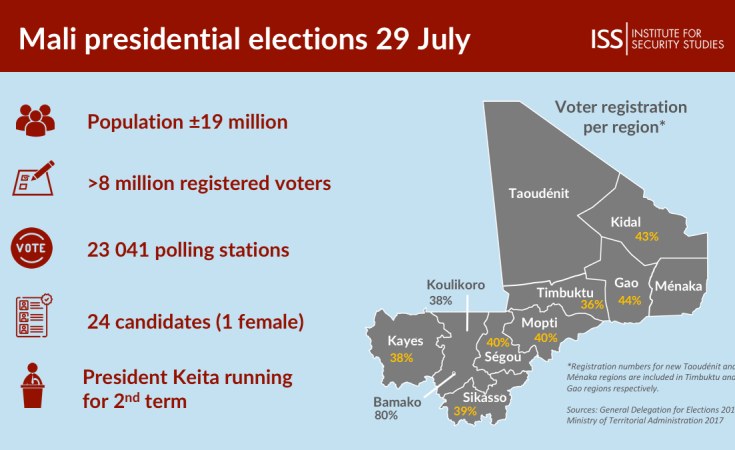 Photo: Indtitie for Security Studies
Malians go to the polls in the second election since the 2012 coup.
African Union (Addis Ababa)
press release

The Chairperson of the African Union Commission (AUC), H.E. Moussa Faki Mahamat, has approved the deployment of an African Union Election Observation Mission (AUEOM) in the Republic of Mali as the country prepares to hold Presidential Election on 29 July 2018.

The deployment of the AUEOM takes place in two phases. The first phase comprises the deployment of five member Core team and six long-term election experts from 25 June to 14 July 2018. This is to ensure that the AUEOM conducts a comprehensive observation and analysis of all aspects and stages of the electoral process. During the second phase, the long term election experts will be joined by 40 short term observers from 21 July to 3 August 2018.

The objectives of the AUEOM are to: (a) provide an accurate and impartial reporting or assessment of the quality of the 29 July Presidential Election, including the degree to which the conduct of the election meets regional, continental and international standards; (b) offer recommendations for improvement of future elections based on its observation and findings; and (c) demonstrate African Union's commitment to support Mali's democratisation process to ensure that the election contributes to the consolidation of democratic governance, peace and stability.

The AUEOM draws its mandate from various African Union instruments, including (a) the African Union Guidelines for Electoral Observation and Monitoring Missions (2002); (b) the OUA/AU Declaration on Principles Governing Democratic Elections in Africa (2002); African Charter on Human and Peoples Rights (1981) and (c) African Charter on Democracy, Elections and Governance (2007), among others.

Why Mali's Election Matters
Tagged:
Copyright © 2018 African Union. All rights reserved. Distributed by AllAfrica Global Media (allAfrica.com). To contact the copyright holder directly for corrections — or for permission to republish or make other authorized use of this material, click here.