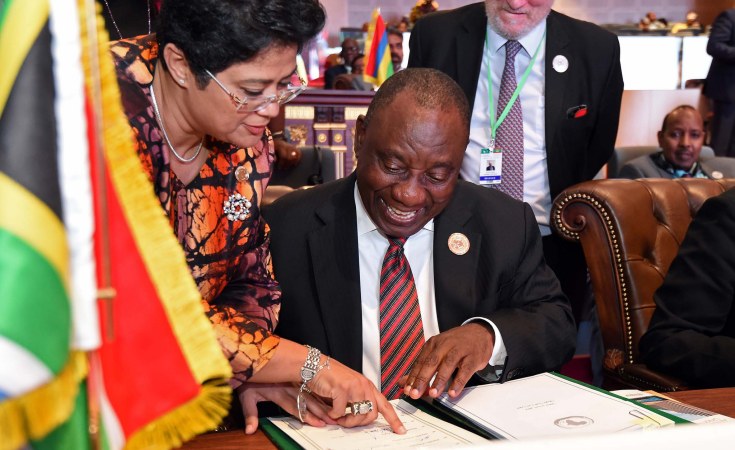 GCIS/Flickr
President Cyril Ramaphosa signing Africa Continental Free Trade Area agreement during the Official Opening of the 31st Ordinary Session of the Assembly of African Union Heads of State and Government in Nouakchott, capital of the Islamic Republic of Mauritania. The agreement will have far-reaching effects on African economies and significantly increase intra-African trade and investment.
Government of South Africa (Pretoria)
press release

President Cyril Ramaphosa has this morning, 30 June 2018, arrived in Nouakchott, capital city of the Islamic Republic of Mauritania, ahead of the 31st Ordinary Session of the Assembly of African Union (AU) Heads of State and Government scheduled to take place from 1 to 2 July 2018.

The 2018 theme for the Summit is "Winning the Fight against Corruption: A Sustainable Path to Africa's Transformation". It presents a unique opportunity to reflect on and address specific challenges related to the fight against corruption on the Continent.

This AU Summit is expected to deliberate on a number of issues, including the institutional reform and financing of the African Union; Peace and Security on the Continent; developments related to the African Continental Free Trade Area (AfCFTA); the African Common Position on negotiations of a new cooperation agreement between the African, Caribbean and Pacific (ACP) developing countries and the European Union (EU) Post-2020 and the adoption of the 2019 African Union Budget.

President Ramaphosa will today participate in a meeting of the African Union High-Level Ad Hoc Committee on South Sudan on the margins of the Summit.

He is also expected to participate in an event to mark the centenary celebration of former President Nelson Rolihlahla Mandela.

The President is accompanied to the AU Summit by the Minister of International Relations and Cooperation, Ms Lindiwe Sisulu; the Minister of Defence and Military Veterans, Ms Nosiviwe Mapisa-Nqakula, the Minister of Trade and Industry, Dr Rob Davies; and the Deputy Minister of Finance, Mr Mondli Gungubele.

Previous Story
The Africa We Want Is Being Built Before Our Eyes - Kagame
Next Story
President Cyril Ramaphosa Leads SA Delegation to AU Summit in Mauritania, 1 to 2 Jul

The Africa We Want Is Being Built Before Our Eyes - Kagame

All The Hot Issues Facing AU Summit 31
Tagged:
Copyright © 2018 Government of South Africa. All rights reserved. Distributed by AllAfrica Global Media (allAfrica.com). To contact the copyright holder directly for corrections — or for permission to republish or make other authorized use of this material, click here.