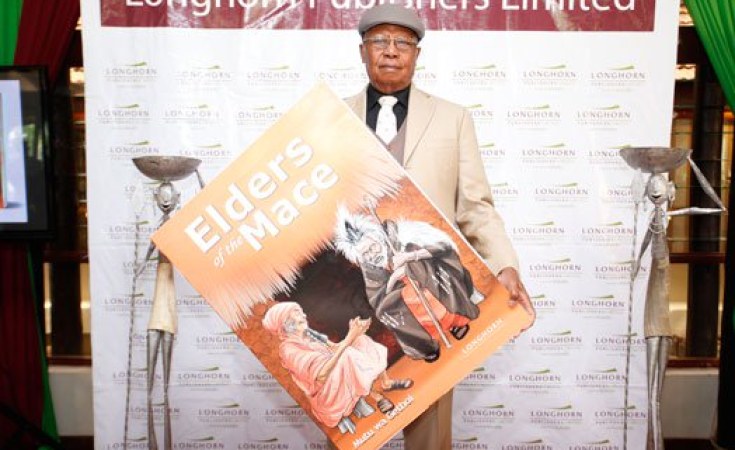 Renowned Kenyan historian and cultural activist, Mutu wa Gethoi, has launched his latest novel that goes by the title Elders of the Mace.

The book, which took 20 years to complete, is a fictional story set in Watuland which reveals the Africans' effort to address issues affecting them through an integration of modern education, technology and traditional culture.

Speaking during the launch on Thursday, author Mutu thanked the publisher and noted that his experiences with his father during the colonial period inspired him to develop a thought-provoking novel, which sought to reel in African leaders to protect the continent's rich heritage eroded by Western cultures.

"I am passionate about Africa and the priceless heritage which has rapidly been phased out by Western traditions. My personal experiences with my father and the humiliation he suffered in colonial Kenya inspired the storyline in Elders of the Mace," said Mutu.

Longhorn Chief Operations Officer Maxwell Wahome commended the writer for his relentless pursuit of writing saying Mutu joins the higher order of elders who continue to inspire young writers who often excuse completion of a masterpiece with cliché writer's block.

He added that the publishing industry continues to grow, breaking the myth of a poor reading culture among Kenyans.

"The literary community which comprises writers, designers, cartoonists, artists among others is growing steadfastly, breaking the myth that Kenyans don't read. On the contrary, more books are being converted to plays and other works of art which is promising for the publishing industry," said Wahome.

Born in 1937 in Nyeri to Leonard Githui wa Kareithi, a teacher, and Millicent Mahiira Karungari, a nurse, Mutu holds a holds a Bachelor of Arts Degree from the University of Northern Michigan.

His pursuit of a Law degree at University of Dar es Salaam ended prematurely due to illness.

Mutu has published six biographies, including the hugely successful From Charcoal to Gold, Njenga Karume's biography, and that of Philip Gichuru Gitonga, Kitchen Toto To Ambassador in 2015.

His latest book adds to the gallery of the synonymous works by Longhorn as a great publishing firm in East Africa with a mission to eradicate illiteracy and expand minds.