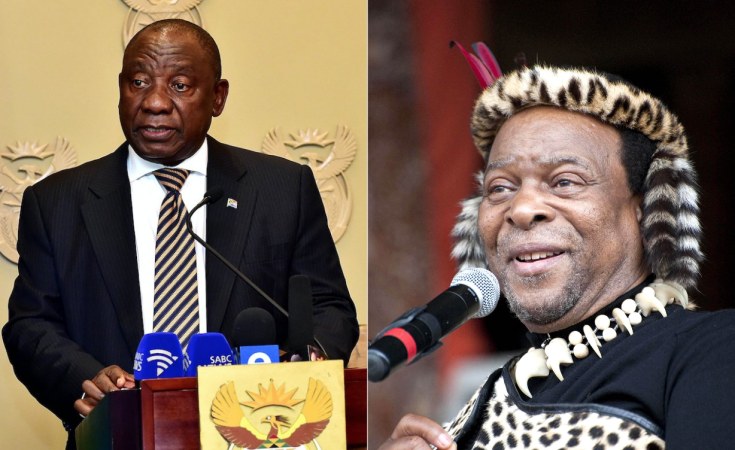 The meeting is understood to be part of the ANC's "damage control" following veiled threats of succession and violence made by the Zulu King during a special imbizo he held in Ulundi this week.

The two are understood to have met at Empangeni in an urgent meeting on Friday night.

The meeting was also attended by IFP leader Mangosuthu Buthelezi.

King Zwelithini held a special imbizo on Wednesday, angry over recommendations by a high level parliamentary panel led by former president Kgalema Motlanthe to repeal The Ingonyama Act that was enacted just before the democratic elections in 1994.

King Zwelithini is the sole trustee.

Ramaphosa assured the King that government would not touch land under the trust.

"I had a wonderful meeting with King Zwelithini. He and I have a wonderful relationship and when the issue of the Ingonyama Trust came up, I felt the need for meeting", Ramaphosa said.

"I assured him that [neither] government nor the ANC has any intention whatsoever to take the land from the Ingonyama Trust. I reaffirmed that land under control of the trust as per legislation and at the end it is the land he has custody of on behalf of people," Ramaphosa said.

Another source said a broader meeting has also been planned with teams from both sides.

Previous Story
Next Story
In the Run-Up to 2019 Elections, Ramaphosa's Action Options Are Severely Limited

In the Run-Up to 2019 Elections, Ramaphosa's Action Options Are Severely Limited

Second Set of Land Hearings Gets Under Way in South Africa
Tagged:
Copyright © 2018 News24Wire. All rights reserved. Distributed by AllAfrica Global Media (allAfrica.com). To contact the copyright holder directly for corrections — or for permission to republish or make other authorized use of this material, click here.