Ugandan Women March for Their Lives 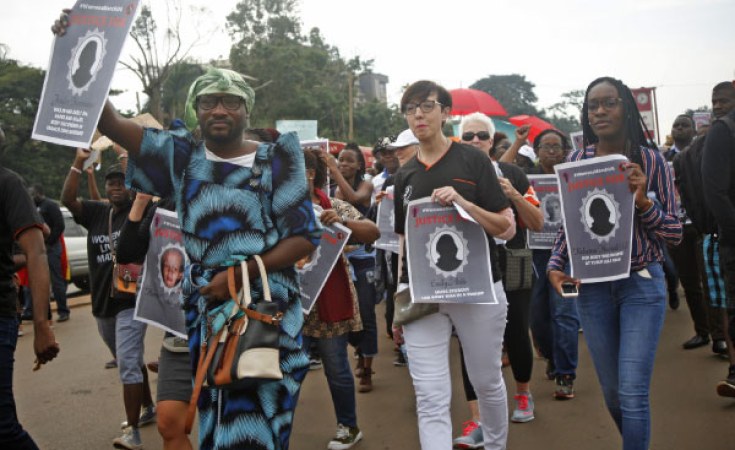 Photo: Kelvin Athuhaire/ Daily Monitor
A man wore a traditional dress, the gomesi as a sign of solidarity. French ambassador Stephanie Rivoal was part of the One Million Women’s March
The Monitor (Kampala)
By Edna Ninsiima

As the last of the Saturday morning showers hit the ground giving way to clearer blue skies, participants flocked the Centenary Park Grounds on Jinja Road in Kampala. The registration table was set, posters with names and pictures of murdered women as well as t-shirts handed out.

For the first time ever in the history of Uganda, a campaign that started and was mobilised online by feminist activists was coming to the streets. The energy was high, the sun was up and people were ready to move. Here, on June 30, 2018 at a little past 10 am, the Women's March in Uganda begun.

The march organised by a group of feminist women under the Women's Protest Group was convened as a result of the rampant femicides that have long been happening in the country since May of 2017. Between then and today, over 40 women in Uganda were found to have been murdered; many of whom had been kidnapped and raped.

In the wake of the initial murders, the now embattled former Inspector General of Police, Kale Kayihura while addressing residents of Entebbe District where more murders of the same method of operation were happening blamed it on night movements and cheating. He then advised women to register their boyfriends in order to help Police during investigations.

Participants of the march included Ugandan women of different ages, African feminists from Kenya and Ethiopia, men, ambassadors, photographers, media and the members of the Uganda Police Force who provided security throughout the march. The procession which walked 1 km to the Railway Grounds chanted asking security forces to end these killings and consider women's safety a priority.

Chants included, "Tulibakazi temutukwaata," (We are women, stop raping us) "Tukooye" (We are tired), "We want security, now" and "Women's lives matter," among others.

They held placards with their demands and appeals written or typed in bold. Different t-shirts worn were designed with messages of women's liberation and calls to action. Dr. Stella Nyanzi, also chief convener of the protest led the crowd, hitting rhythmically on a small drum and calling for chant responses while other women blew whistles. A man wore a gomesi, the women's traditional dress from Buganda as a sign of solidarity.

Victims not to blame

At the Railway grounds, the Group's Chairperson Godiva Akullo called upon the public to stop the blaming of victims; asking if one was walking at night or what they were wearing when they were murdered or raped. "We are here to demand that the government treat women as though their lives matter," she added. 42 names of the departed women were read out by the group's Head of Legal Affairs, Patricia Twasiima who asked that the crowd observe a moment of silence for them.

Hajara Batte, a key member of the working group concluded the march by speaking on behalf of sex workers and LBQ women who she said are the most marginalised and brutalised communities in the country which Police forces have to protect instead of frame.

Since last year, only three suspects have been arrested in relation to these kidnappings and murders, and none of them has been convicted or jailed. The investigations have been slow and often inconclusive. While appearing on NTV Uganda's Talk of the Nation on Sunday night, Women's Protest Group spokesperson Lydia Namubiru revealed that the next step would be to petition the Speaker of Parliament on the matter.

Sarah Neliima worked as a waitress at Friends Restaurant in Katabi town, a few kilometres from Uganda's international airport in Entebbe. At 9pm on September 19, 2017 Neliima, who lived nearby, finished for the day.

"That was the time she usually left work for home," said Harriet Namusoke, a friend. The next day, Neliima, 22, did not show up for work. She was not at home either.

Concerned colleagues and relatives mounted a search. Neliima's body was found later that day in a banana garden, a stone's throw from the Entebbe-Kampala highway - the 23rd woman to have been murdered in the area since June. (Agencies)

Who's Buying the Biggest Guns in East Africa?
Urban Issues