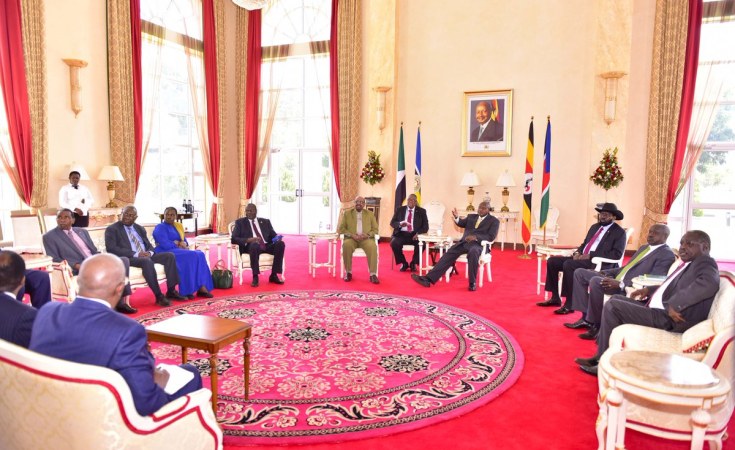 Government troops and rebel forces have agreed to withdraw from urban areas. The security deal comes ahead of a meeting between President Salva Kiir and Riek Machar, where potential power-sharing talks will be held.

The government of South Sudan and rebels troops have signed a deal on security arrangements for the region, just days after the violation of a newly agreed ceasefire.

The deal was made following talks hosted by Sudan and was signed by envoys from President Salva Kiir's government and the rebels led by Kiir's former vice president, Riek Machar.

"With the signing of this agreement, it is time for our brothers in South Sudan to put aside their weapons and for South Sudan to achieve stability," Sudanese Foreign Minister Al-Dirdiri Mohamed Ahmed told reporters on Friday.

The deal will see the government and rebels withdraw troops from urban areas, a Sudanese official said. The security deal aims to end a four-and-a-half year civil war.

"All parties have agreed to withdraw military troops from urban areas as part of the security agreement," said Jamal Omar, the Sudanese chief of military intelligence.

Peace talks between the two warring sides have been ongoing since last week, when a long-awaited ceasefire was violated hours after it came into effect. Both sides have blamed each other.

Ahmed said the South Sudan government and rebels had also begun power-sharing talks, adding that Kiir and Machar would meet in the Ugandan capital, Kampala, on Saturday to try to clinch a final peace deal.

"We expect an agreement at this meeting on a power-sharing blueprint," said Ahmed. "We are optimistic regarding reaching a deal on power sharing in South Sudan."

In August 2015, Kiir signed a peace deal with the rebels after the UN threatened the country with sanctions. The agreement stated that fighting would immediately stop, that military forces would leave the capital, Juba, and that rebels would be given the post of "first vice president." Efforts to revive the peace deal led to a ceasefire in December 2017, which lasted only a few hours before both sides accused the other of breaking it.

What sparked the civil war?

The landlocked state of South Sudan gained independence from Sudan in 2011 after a long conflict. The moment was praised around the world, but in 2013 Kiir accused Machar, who was his vice president, of plotting a coup against him. Violence erupted between the two factions, feeding on the country's ethnic tensions.

The war has claimed at least 50,000 lives and displaced 4 million people. Prolonged fighting has plagued the country with food insecurity; famine was declared in several regions in 2017. In late May, British charity Oxfam called for urgent action to save millions of people from starvation.

Peace Remains Elusive in South Sudan
Tagged:
Copyright © 2018 Deutsche Welle. All rights reserved. Distributed by AllAfrica Global Media (allAfrica.com). To contact the copyright holder directly for corrections — or for permission to republish or make other authorized use of this material, click here.