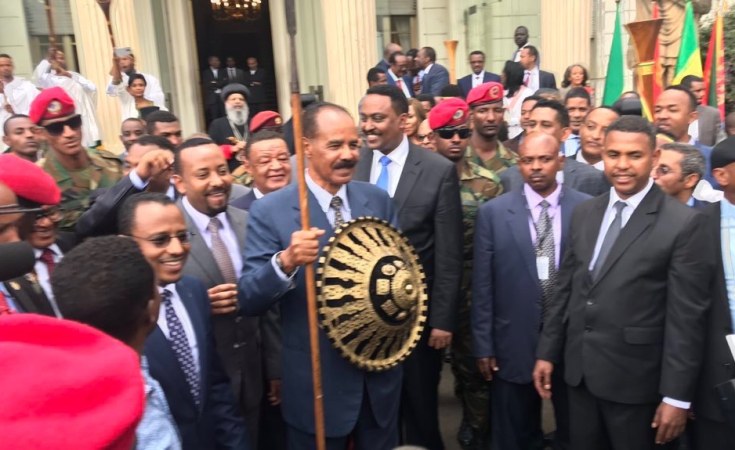 Photo: Fitsum Arega/Twitter
HE President Isaias Afworki received to his delight a surprise gift of a horse, a shield and a spear— from Oromia Regional President Lemma Megerssa. A spear and shield is the most prized possession of an Oromo traditional warrior.
Deutsche Welle (Bonn)

Ethiopia has welcomed Eritrean President Isaias Afwerki for his first visit in 22 years. The visit shores up a remarkable improvement in relations after a generation of mutual mistrust and enmity.

Afwerki, Eritrea's president throughout its 25 years of independence, arrived in Ethiopia on Saturday - less than a week after the two countries declared the official end to a two-decade-old border war.

He was greeted upon landing in the capital Addis Ababa by reformist Prime Minister Abiy Ahmed, who himself made a historic visit last weekend to Eritrea.

Chief of staff to Ethiopia's Prime Minister Abiy Ahmed, Fitsum Arega, thanked Isaias "for honoring us with a visit" in a statement.

DW's correspondent in Addis Ababa Yohanes G. Egiziabher spoke to one excited onlooker who said he was looking forward to being able to cross the border to see friends.

The 72-year-old Afwerki last visited Ethiopia in 1996, after Eritrea gained independence from its southern neighbor in 1993. That trip was followed by a 1998-2000 war over the disputed border that killed some 80,000 people.

The two countries signed an official declaration of peace on Monday, with the two leaders announcing joint development of ports in Eritrea, the reopening of roads from land-locked Ethiopia, and the restarting of flights.

Eritrea seceded from Ethiopia after a long war of independence, but territorial disputes were carried over to result in the conflict that ended in 2000. Although a peace agreement was signed at the time, Ethiopia refused to implement it.

With the old Eritrean embassy in Addis Ababa set to reopen on Sunday, some Ethiopians have compared the thawing of relations to the fall of the Berlin Wall.

The refusal of Ethiopia to hand over border areas that were disputed has been used by Isaias to keep Eritrea in a state of perpetual military readiness, resulting in a system of conscription that has caused thousands of Eritreans to flee toward Europe and Israel.

Ethiopian, Eritrean Leaders Embrace as Thousands Cheer
Tagged:
Copyright © 2018 Deutsche Welle. All rights reserved. Distributed by AllAfrica Global Media (allAfrica.com). To contact the copyright holder directly for corrections — or for permission to republish or make other authorized use of this material, click here.