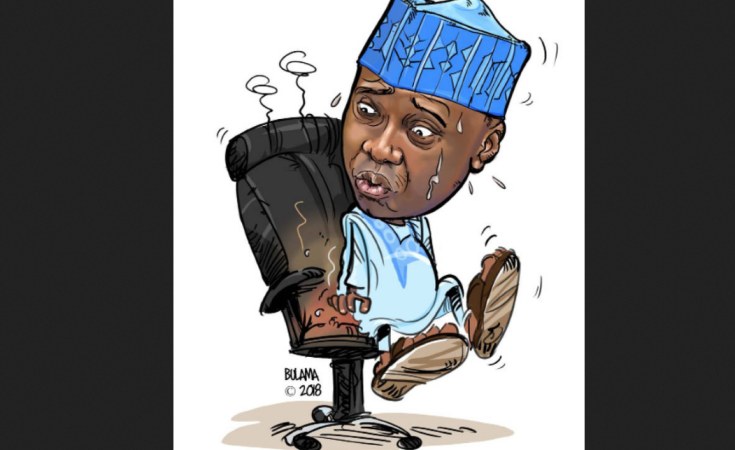 Daily Trust
Saraki in the hot seat.
This Day (Lagos)
By Hammed Shittu

Ilorin — The All Progressives Congress (APC) in Kwara State has berated the Deputy National Publicity Secretary of the party, Mr. Yekini Nabena for attacking the Senate President, Dr Bukola Saraki.

The party in a statement by its state Chairman, Alhaji Isola Balogun Fulani yesterday warned Nabena to stay within the mandate of his new position, and stop his campaign of uninformed comments against Saraki.

The local chapter of APC was reacting to a statement credited to Nabena calling on Saraki to declare his stand on the reformed R-APC.

The party asked the national deputy publicity secretary to clarify if he was speaking on behalf of his superiors in the APC National Working Committee (NWC) or he was running errand for some faceless mischievous elements who are his paymasters.

"The Kwara APC has taken note of the immature display of lack of decorum by one Yekinni Nabena in a statement he issued today calling the Senate president names. Nabena needs to first clarify if he was speaking on behalf of the National Working Committee of the APC or representing some faceless mischievous elements who are his paymasters.

"Instead of embarrassing himself with his meaningless diatribe that demonstrates his lack of decorum and immaturity for the position he has accidentally found himself , Nabena should focus on understanding what his current position entails," the statement said.

"This is necessary because his preparedness and capacity have definitely been called into question by his antics. He definitely cannot use Saraki's name to get cheap popularity and buy relevance. At the right time, our leader, the Senate president, who remains one of the founding fathers of the APC and a deciding factor in our national politics today, will make his decision known to the whole world when he is ready," the statement added.

The Kwara APC added that, "as a grassroots politician who believes in carrying everyone along and works in the best interest of the people at the State and national levels, Saraki does not owe an unknown factor like Nabena any response or explanation.

"Instead, at the right time, I am sure that his friends, supporters, associates, all Nigerians and the entire world will know where he stands on issues regarding 2019 elections. Saraki that we know does not hide to play his politics. He plays in the open," the party said.

"Those who feel uncomfortable with his rising profile will continue to bell-ache for a long time to come. In fact, we enjoy the way he is making his opponents fret and suffer insomnia by his silence," the statement said.

Saraki Should Tell Where He Belongs - Ruling Party

Nigerian Police Summon Senate Head Saraki Over 31 Deaths
Tagged:
Copyright © 2018 This Day. All rights reserved. Distributed by AllAfrica Global Media (allAfrica.com). To contact the copyright holder directly for corrections — or for permission to republish or make other authorized use of this material, click here.