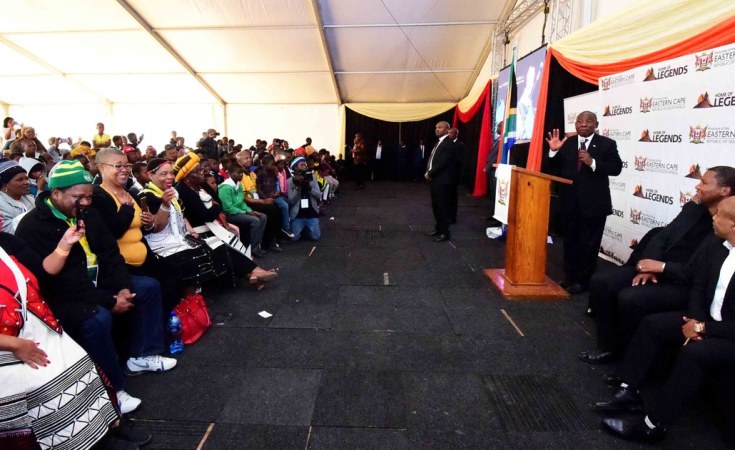 Photo: @CyrilRamaphosa/Twitter
President Cyril Ramaphosa addressing members of the community in Mvezo in the Eastern Cape as part of the Centenary Celebrations of Nelson Mandela.
News24Wire (Cape Town)

Land expropriation without compensation is one of the key programmes that will take forward former president Nelson Mandela's vision of a free South Africa, both President Cyril Ramaphosa and former president Jacob Zuma said on Wednesday.

The current and former presidents were speaking at the government's official centenary celebrations of Mandela at his birthplace in Mvezo, near Mthatha in the Eastern Cape on Wednesday.

Mandela would have turned 100 on Wednesday and the celebrations were held to reflect on the icon's life and legacy.

Ramaphosa said the process of expropriating land without compensation would lead to enhancing the growth of South Africa and increase agricultural production and food security.

"The return of our land to our people will unleash enormous growth in our economy," Ramaphosa said.

He urged those who would be involved in the process to not fear.

"Fear not because we are going to unlock the strength and power of returning the land to our people and we will handle this through dialogue...," Ramaphosa said.

"I would like it to start here because the Eastern Cape is fertile of this agricultural revolution," he said.

Ramaphosa also said there was no place for racism, tribalism and chauvinism in the South Africa of Nelson Mandela.

While he said that sexism still existed in South Africa, he added that Madiba would have wanted it to be rooted out.

He also said South Africans should build a non-sexist society to end all forms of violence against women and ensure equal opportunities for all.

"We are celebrating the centenary of Nelson Mandela in the 24th year of our democracy. As the founding president of the democratic state, Madiba made sure that he laid a foundation for the great progress we have made since 1994 in improving the lives of our people," Ramaphosa said.

Ramaphosa added that the legacy of Mandela would continue to live in the hearts and minds of the people of South Africa as he was praised for many things, starting from social grants money, where people in rural areas still say "siyabulela imali ka Mandela" (We thank Mandela's money).

Zuma pointed out that economic emancipation also meant ensuring that the black majority participated fully in the economy - not only as workers but as owners and managers of key centres of production as well.

"In honour of Madiba, we want to see factories owned by black people so that their participation in the economy is not confined to share ownership skills only," he said.

Zuma added that the government's declaration of free education was also another call to honour Mandela's love for education.

Ramaphosa added that Madiba would be proud of how the government had made education accessible to the black child.

Madiba would welcome the greatest progress we have made in massively expanding access to education for the black child, Ramaphosa said. He added that Mandela was with no doubt speaking from personal experience when he said 'education is the most powerful weapon we can use to change the world'.

"Madiba would have been pleased with the fact that we are now providing free higher education to children from poor and working-class backgrounds," Ramaphosa added.

Zuma and Ramaphosa both thanked South Africans for loving Mandela even though they were told that "he was a terrorist and a sell-out".

"I must also correct one thing, by the way, that I have heard in the air, some people saying Madiba sold out. Madiba never sold out. Madiba fought for this country to liberate it. He sacrificed as the longest-serving political prisoner," said Zuma.

"I believe what people are doing is a failure to take South Africa forward and want to blame the man who brought freedom," he added.

Jesus Visited Africa This Weekend, And There's Video to Prove It!
Europe and Africa