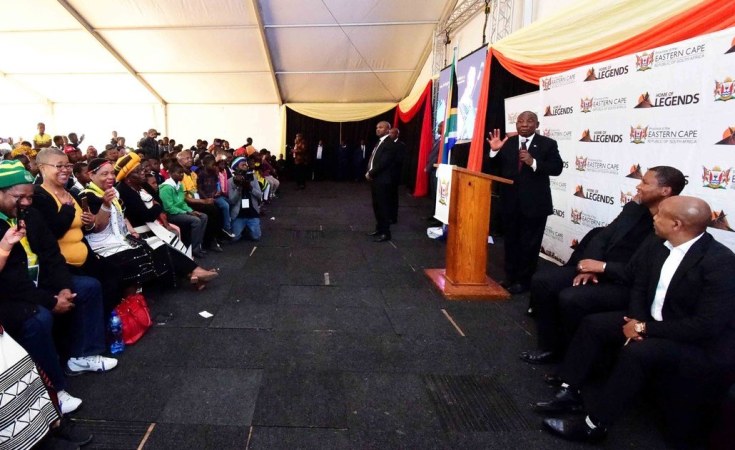 "I think if we are to rate it on a scale of 10, one not being very satisfactory and 10 being satisfactory, those that I have chaired, I think I'll give an eight," he told News24 on the sidelines of Wednesday's land hearing in Mahikeng.

"An eight - because the quality of the discussions, or the arguments, have been superior.

"Number two, I think in all instances we underestimated the interest that South Africans would have wanted to show to come and want to participate. And it has been exemplary in terms of how many people have been here.

"And the third thing, I think that regardless of the few areas where we have to ask a few people to behave, by and large, people have allowed others to speak even if they like or they don't like [what they had to say].

"Yes, there have been incidences where we have to intervene, like today, but it's not a bad thing - it's just people are jumping the queue, not that they are disrupting it. So, I'm not unhappy with what is happening. People want to say their say, of course, we must expect that there will be political bantering, and that we must expect."

However, after proceedings on Wednesday, Smith expressed his concern about a lack of tolerance at that particular hearing.

"We expected the hearings to be robust but there is a difference between robust and harassing people who are speaking. So if there is a criticism of this process, it is the fact that the tolerance levels today have not been at the level that they have been," he said, according to a statement.

The committee expressed its concern that some people might have left Wednesday's hearings feeling that they were not allowed the freedom to have their say.

One of the characteristics of the hearings, which saw the committee criss-cross the country from the North West to the Free State, Limpopo and Mpumalanga, to where its two delegations currently are in KwaZulu-Natal and the North West, is how many speakers declare their allegiance to political parties and then recite that party's stance on expropriation without compensation.

'Everybody will get an opportunity'

"We've been very clear about that one. We've asked all political parties, we've asked all civil society organisations, whether it's AfriForum or the churches, to bring their people here, mobilise their people," he told News24.

"But remember what we have always said: it doesn't help you to give the same argument a hundred times, which seems to be the case, that political parties bring individuals and give them the script.

"That is one argument, it is not a hundred arguments because a hundred people said it. In the long run, they will realise that what they have been doing, counts for one. So I have no problem with that, every time we talk to you guys in the media, we're saying it's not a referendum, it's not about popularity. It's going to be about the essence of the argument."

Smith's co-chairperson Lewis Nzimande, speaking on the sidelines of Wednesday's hearing in Vryheid in KwaZulu-Natal, said he was "quite happy" with proceedings. He's been impressed with the variety of speakers having their voices heard at the hearings, form ordinary members of political parties, to farmworkers.

"This is a public hearing, everybody will get an opportunity. You've heard people saying: 'I'm an individual, I'm just here to come and call for peace'.

"It's a good sample of the public of South Africa," he said.

He said some people came and spoke about two things.

"They say: 'expropriate the land, but I still have an issue of compensation that is outstanding somewhere'.

"We've explained to them that this process is not linked to the process of their land claims, land disputes or any other programme around redistribution, land restitution or tenure.

"It's to do with the possible amendment, if it's necessary at the end, to amend the Constitution to allow for the effective expropriation without compensation," he said.

Public hearings only the first step

With the majority of speakers calling for expropriation without compensation, it is no wonder EFF chief whip and deputy president Floyd Shivambu is also happy with the process so far.

"So far so good in terms of the submissions made here. The only people that got to oppose the expropriation of land without compensation is predominantly white people who came to protect, of course, their private interests."

UDM MP Mncedisi Filtane said he has heard "some very interesting stories" by people who oppose expropriation without compensation.

"All of a sudden, people are complaining about millions of rands that will be lost. They are not telling us what they have done with the millions they have made over the hundreds of years," he said.

"They're not telling us where this land will come from in order for the people to have title deeds."

He said the UDM decided to be very democratic about the issue, saying they support, in principle, the motion.

"But let's go out and listen to what people want, and what I have heard so far is overwhelming support for expropriation without compensation."

Cope MP Deidre Carter pointed out that the public hearings are only a first step of the process. If the committee decides that the Constitution must indeed be amended, a further process will start.

"I think this is a 'tick the box' process. I think that at the end of the day, this is a process that is not going to lead to much because a new process will have to be started once the committee decides," she said.

"This is not a referendum, this is not how many yeses or how many no's, it is about the quality of inputs," she said, echoing Smith.

On Thursday the public hearings will be held at the Rustenburg Civic Centre and the Makhonyeni Hall in Jozini. Both hearings will start at 11:00.