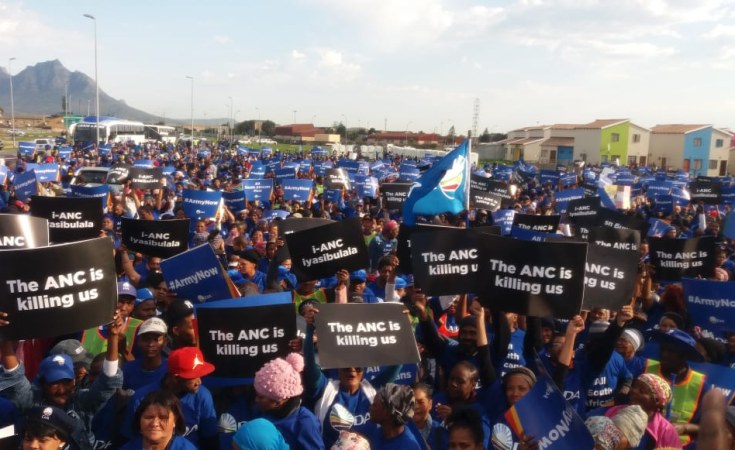 He confirmed his stance an hour before the DA, led by party leader Mmusi Maimane, marched to the Nyanga police station calling for the deployment of the army to crime-ridden areas in the city.

Launched in May, the operation adopts a "geographical and targeted approach focusing on dominating specific hotspot areas and identified individuals".

Cele said the defence force's intervention was not necessary despite his predecessor, Fikile Mbalula, last year promising embattled residents that the army would be dispatched to deal with the bullets and bloodshed in their crime-stricken communities.

The police minister said that at the time of "Honourable Mbaks'" commitment, Operation Thunder had not yet been in effect.

"People don't want the army per se. They want safety," he said. "They don't want soldiers, they want peace."

Cele pointed out that soldiers were not trained in policing, but for military situations.

"There are things that they can't tolerate that the police can. If the police look for a suspect, they must rather allow him to escape rather than [fire upon bystanders]. The army is not trained in that," Cele explained.

He said better options were needed.

"We haven't reached the point where we are going to deploy."

Cele said since the inception of Operation Thunder 5 111 arrests had been made, including 999 for contact crimes such as murder and attempted murder.

Among the high flyers nabbed were two alleged 28s Barbarian Mobsters hitmen from Kraaifontein; the alleged leader of the Laughing Boys in Hanover Park, for drug possession; and an alleged Hard Livings hitman from Manenberg.

"In the nine Operation Thunder stations there has been an increase in murder in Mitchells Plain, Bishop Lavis, Elsies River and Philippi East. A reduction and stabilisation in murder occurred in five stations: Ravensmead, Philippi, Manenberg, Steenberg and Worcester," Cele said.

The defence force did not have the mandate to fight crime, the police minister insisted.

"You might exacerbate the situation where the army will create more hate between the government and the people. There is no [instance] where the police were shot at and ran away, [creating the need for] the army. The police are handling the situation in a softer [manner]. They are trained to not put the lives of [innocent] people in danger."

"Without intelligence and policing skills to credibly identify who [among] the community are the real gangsters, experience in other countries has revealed mass killings of innocent young men because they fit a profile - young and black male," he said.

"The view of the police, which is the correct one, has always been that to fight crime you equally need detectives that can blend in and credibly identify and isolate the real gangsters. The military overwhelms the space, pushing everything underground, with only dead bodies falling on the surface each morning."

Jacobs said there was no evidence to prove that military deployment helps to fight crime.

"In most cases, the longer the military stays, [the more] they become part of the problem, with a contest between deaths by gangs and deaths by military."

Cele said he and Maimane had agreed to engage on matters, but had not had a discussion about the party's call for army deployment ahead of the march.

"Sitting down and talking could have given a better result," he said.

He also received a letter from Premier Helen Zille "asking for deployment, not discussion" on Wednesday.

Previous Story
Next Story
DA Wants to Send the Army Into the Cape Flats - Communities, Not So Much

DA Wants to Send the Army Into the Cape Flats - Communities, Not So Much 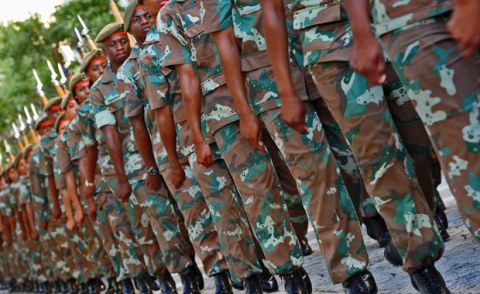 Over 2,000 Murders in 6 Months - Who Will Head Police in Cape?
Tagged:
Copyright © 2018 News24Wire. All rights reserved. Distributed by AllAfrica Global Media (allAfrica.com). To contact the copyright holder directly for corrections — or for permission to republish or make other authorized use of this material, click here.