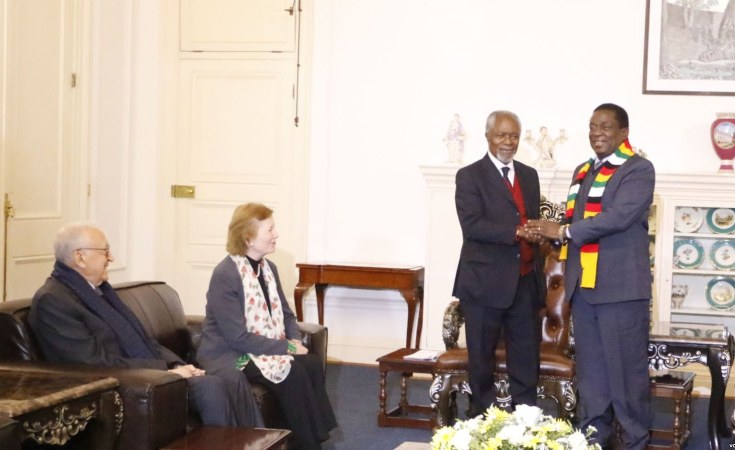 OPPOSITION demands must be reasonable, or they become an impediment to the electoral process, former UN secretary general Kofi Annan has said.

Chairman of The Elders Group, Annan was responding to questions from journalists at a press briefing in Harare at the end of marathon meetings with political leaders ahead of the country's July 30 ballot.

The group of eminent global personalities was visiting Harare to plead for a free and fair election amid demands from the opposition that the Zimbabwe Electoral Commission (ZEC) has characterised as "unreasonable."

"There are demands and there will be demands. What is important is that we all play by the rules and make reasonable demands," he said.

"If we make demands that cannot be fulfilled we are complicating the process."

The former UN chief did not hold back, seemingly aiming his attack at opposition leader Nelson Chamisa's unspecified threats against ZEC if his demands for access to the ballot printing, storage and distribution are not met.

Chamisa has also threatened a vigil by his supporters at the ZEC offices in Harare if his demands are not met.

And Annan warned this could be tantamount to inciting citizens.

"We should be careful what we say because the idea is not to invite. You never know what will happen," the human rights lawyer said.

"If there are any problems those aggrieved should use existing legal means to have them resolved."

Chamisa has already led two massive demonstrations against ZEC accusing the election management body of favouring the ruling Zanu PF party, an accusation that has vehemently been denied.

The MDC Alliance presidential candidate has gone on to write to regional power block SADC demanding an extraordinary summit to discuss what he has described as a crisis in Zimbabwe.

He has demanded that SADC takes over the running of elections in the country. SADC chairperson and South African President Cyril Rhamaphosa is yet to respond. President Emmerson Mnangagwa has also wadded into the storm, arguing that Chamisa was a co-chairperson of the parliamentary process that selected Chigumba and her commissioners.