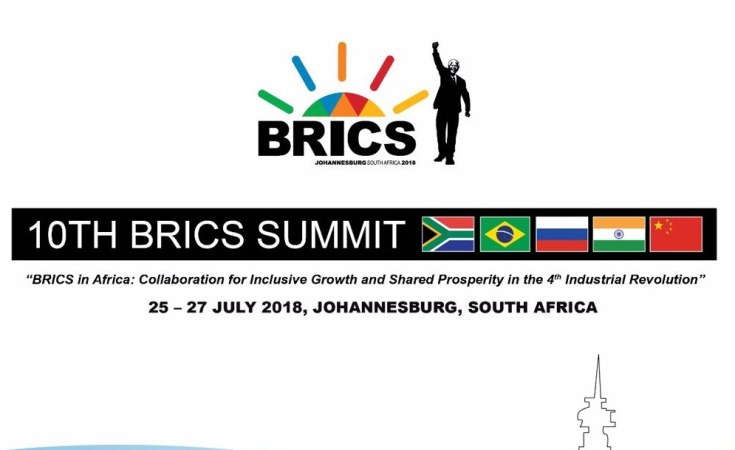 @GovernmentZA/Twitter
South Africa is hosting the 10th #BRICS Summit from 25 - 27 July 2018 in Johanneburg. The summit's theme is "BRICS in Africa: Collaboration for inclusive growth and shared prosperity in the 4th Industrial revolution."
Deutsche Welle (Bonn)

The leaders of Brazil, Russia, India, China and South Africa have a series of ambitious plans for the meeting in Johannesburg.

South Africa's government is gearing up to host the tenth BRICS annual summit in Johannesburg on July 25-27, 2018. South Africa, which holds the rotating chair for 2018, hopes to strengthen its local economy by cooperating better with BRIC partner countries.

For South Africa's new president, Cyril Ramaphosa, the summit is an opportunity to present his ambitious reform plans to the international community. Under his predecessor Jacob Zuma, South Africa lost its economic supremacy in Africa.

Despite the country's considerable potential, it slid into a political crisis triggered by corruption scandals and abuses of power. Ramaposa replaced Zuma as president in February, nine years after the ruling party stalwart was elected to lead the country.

Ramaphosa wants to use the meeting in Johannesburg, which Russian President Vladimir Putin, India's Prime Minister Narendra Modi and China's President Xi Jinping are expected to attend, to strengthen the confidence of foreign investors in South Africa and to demonstrate how the country has changed politically.

"Now [Ramaphosa] can set out his priorities that the Department of International Relations has hammered out," Mthembu told DW.

That doesn't mean, however, that South Africa is moving away from its traditional partners, such as the European Union and the United States.

"Rather it shows that BRICS is an important element of South African policy," Mthembu said.

Believing that many global institutions are too dominated by the West, the BRICS group of countries want to develop their own institutions.

The New Development Bank - founded in 2014 - aims to make emerging economies more independent of the International Monetary Fund and the World Bank. The bank, which grants loans for public and private infrastructure and sustainable development projects, that will be discussed at the summit.

The Shanghai-based bank has already approved loans for projects in China, India, Brazil and South Africa. Brazil has expressed an interest in strengthening the institution and promoting more projects.

"It will also be about good governance, as well as joint approaches to science and education projects," said South African BRICS expert Ari Sitas.

South Africa wants to counter earlier criticism that it hasn't be involved enough in developing projects and initiatives.

According to Sitas, South Africa's proposals for the BRICS summit also include the creation of a vaccine research center in Africa to develop vaccines against diseases such as malaria, HIV and tuberculosis. Energy and environmental issues - such as the reduction of fossil fuels - as well as the creation of a BRICS gender and woman forum are also on the agenda.

"Ramaphosa brings new energy, but he hasn't had a chance to propose other ideas that bear his signature," Sitas told DW.

The power relations within the BRICS group are unbalanced - South Africa's economic output is quite low, China is the driving force.

"China plays a major role and has done much in terms of infrastructure in Africa in the past decade," said Mthembu. China alone contributes nearly two-thirds of the group's total economic output.

"If China were to fail, that would have a big impact on other countries, but what's important is that all decisions are made unanimously - that balances the power gap," he said.

But that is one of the reasons why there is a will for further cooperation, Jakkie Cilliers from the South African Institute for Security Studies told DW. "Everyone is trying to benefit from the special relationship with China," he said.

And that's also why BRICS is important for South Africa. "We only contribute about three percent to BRICS's economic performance, but we are considered by our partners as the leading nation in Africa," said Cilliers.

Xi, ahead of his arrival for the BRICS summit, signed 15 bilateral deals with Rwanda, including loans and grants worth million of dollars, during a visit to the country in east Africa. The Chinese president's Africa trip began in Senegal and his last stop is the Indian Ocean island of Mauritius.

Smiles All Round as China Invests Massively in South Africa
Tagged:
Copyright © 2018 Deutsche Welle. All rights reserved. Distributed by AllAfrica Global Media (allAfrica.com). To contact the copyright holder directly for corrections — or for permission to republish or make other authorized use of this material, click here.