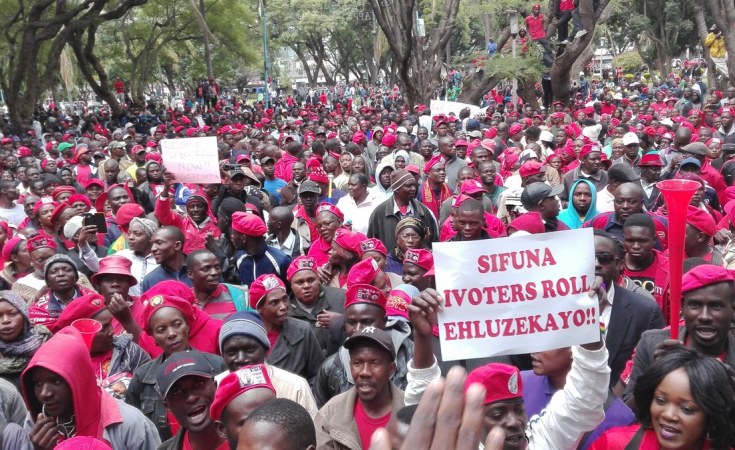 The Zimbabwe Republic Police (ZRP) has banned a third MDC-Alliance demonstration against the Zimbabwe Electoral Commission (ZEC) which was set for today, saying the force was preoccupied with final preparations for harmonised elections next Monday.

Police also said they had committed personnel to the MDC-Alliance's rally in Harare on Saturday.

In a statement, Officer Commanding Harare Central District Chief Superintendent Albert Ncube said provisions of Section 29 of the Public Order and Security Act Chapter 11:17 would be invoked if any of the conditions were violated.

Chief Supt Ncube was responding to MDC-T secretary-general Mr Douglas Mwonzora's letter notifying the police of the party's intention to carry out a demonstration today.

"We acknowledge receipt of your letter notifying the regulating authority of your intention to hold the above mentioned demonstration against the Zimbabwe Electoral Commission on the 25th of July 2018 from 1000 hours to 1700 hours," said Chief Supt Ncube.

"You are advised that currently the District is engaged in final preparation for elections deployment scheduled for the 30th of July 2018. Our members are engaged in trainings and collection of kit, as well as final deployment strategies /other political rallies," he said.

The MDC-Alliance has already held two demonstrations against ZEC demanding to be involved in the design, printing, distribution and storage of the ballot papers.

Section 239 (g) of the national Constitution mandates only ZEC to carry out these roles.

ZEC chair Justice Priscilla Chigumba said in other jurisdictions, stakeholders were allowed to "touch the ballot or feel it" because they had a legislative framework for that.

He also advised the MDC-Alliance that the venue they intended to use for today's demonstration, the Africa Unity Square, was being used by the Ministry of Sport, Arts and Recreation.

"You are advised that the venue which you intend to gather, the Africa Unity Square, is currently being utilised by the Ministry of Sport, Arts and Recreation from Tuesday July 17, 2018 to Saturday August 4, 2018 who are celebrating the arts, culture and heritage policy of Zimbabwe," said Chief Supt Ncube.

"However, the demonstration could not be sanctioned due to the following reasons. You have already applied for a star rally scheduled for July 28, 2018, which we had already sanctioned. You previously held two similar demonstrations against ZEC on the June 5, 2018 and July 11, 2018 over the same issues."